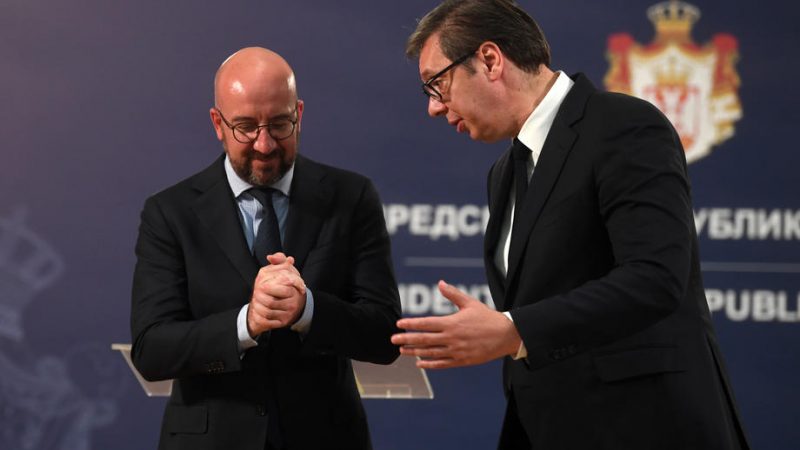 Vučić also said Michel voiced the EU’s expectation for Serbia to join the sanctions against Russia, and that he had informed Michel about the situation and the stance of Serbia. [EPA-EFE/DIMITRIJE GOLL / SERBIAN PRESIDENCY]

“I don’t see anything bad in this for Serbia and, as far as Serbia is concerned, I believe that after the discussion I will be having with the government representatives, we will be joining with great pleasure and great hope,” Vučić added.

According to the president, the initiative is important for everyone in the Western Balkans and an important step forward. There were “no conspiracy theories” in it, he added.

Michel, for his part, said that the European Geopolitical Community could help the countries aspiring to join the EU because it would make the process of their accession simpler.

“I fully support the idea of speeding up the process of accession to the Union and for it to be more efficient. It should bring tangible benefits to the membership candidate countries. The ‘European Geopolitical Community’ would enable regular top-level meetings, exchange of ideas about common interests and coordination,” said Michel.

He stated that he had put forward the proposal because it was important that a political format existed “here and now,” that would enable “joint commitment to particular challenges,” especially foreign political and geopolitical ones, and that the proposal’s purpose was not “to delay something else.”

Vučić also said Michel voiced the EU’s expectation for Serbia to join the sanctions against Russia, and that he had informed Michel about the situation and the stance of Serbia.

“We discussed the issue of energy and market in Serbia, and we can expect the EU’s help in that regard,” Vučić has stated.

Strahinja Subotić from the European Policy Centre think tank commented that Michel’s visit to Serbia is significant in the context of the war in Ukraine, particularly as this Western Balkan country has yet to fully align with the EU’s position and sanctions on Russia.

In Belgrade, Michel brought calls for further alignment on this matter and ideas for potentially accelerating the region’s path to the EU, Subotić told EURACTIV.rs.

French President Emmanuel Macron has also suggested a political community that would bring together European countries, including the UK, Ukraine and those in the Western Balkans in a economic, political and even defence cooperation.

While the initiative has been welcomed by some, others have said it is a way to sidestep the enlargement process which as been stagnated for several years.