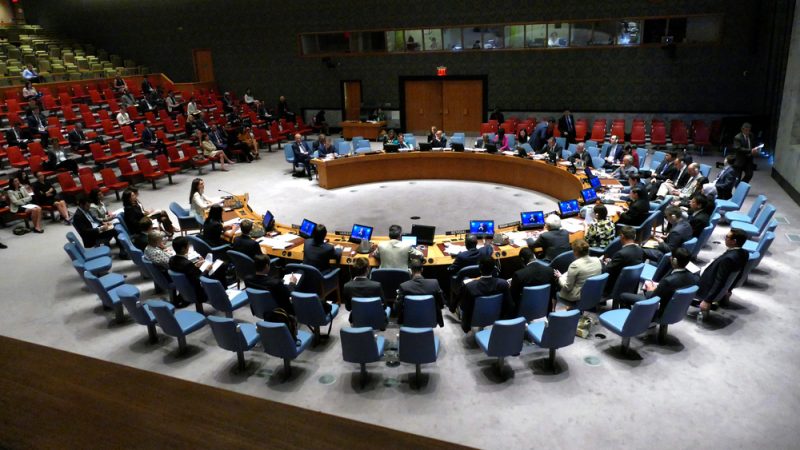 During the UN Security Council session in New York, Serbian Foreign Minister Nikola Selaković said the rights of Serbs in Kosovo are threatened, and they worry their fundamental human rights may be violated. According to him, the goal of the Pristina regime is not an independent Kosovo but the creation of “a great Albania.” [Shutterstock/Golden Brown]

The foreign ministers of Serbia and Kosovo clashed during a debate on Secretary-General Antonio Guterrres’ biannual briefing on the work of the UN Mission in Kosovo (UNMIK) in the UN Security Council.

During the UN Security Council session in New York, Serbian Foreign Minister Nikola Selaković said the rights of Serbs in Kosovo are threatened, and they worry their fundamental human rights may be violated. According to him, the goal of the Pristina regime is not an independent Kosovo but the creation of “a great Albania.”

“The Serbian foreign minister is today trying not only to manipulate facts but also to do something very similar to what Milošević was doing in the 1980s. That is how a war broke out in the Balkans. It started by creating a perception that the Serb minority (in Kosovo) was endangered, that Serbia’s intervention was required, accompanied by propaganda and fake news,” Gervalla-Schwarz said.

“It is sad that Serbia cannot distance itself from Milošević’s crimes,” she also said. She added that incumbent President Aleksandar Vučić is “part of the Milošević system,” that he “propagated genocide as something heroic” and that he “has never apologised.”

Selaković noted that Gervalla-Schwartz had spoken about Serbia’s crimes in the 1990s “rather than about real problems, violations of human rights and ignoring the crimes committed by the Kosovo Albanians.”

Meanwhile, ethnic Albanians who are Serbian citizens living in the southern Presevo Valley of Serbia, report being illegally removed from voter lists due to their ethnicity. In a move dubbed as administrative ethnic cleansing by the Serbian Helsinki Committee, over 6000 people have been rendered stateless and unable to access healthcare, education, travel, or buy and sell property.

The spat came at the same time as representatives from both countries were in Brussels trying to reach an agreement on license plates as a temporary solution signed in October 2021 expired on Thursday.

Kosovo cars travelling to Serbia had been required to do so ever since a 2011 agreement between the two countries had expired. Kosovo’s previous government had refrained from reciprocating due to pressure from the Quint countries and for fear it may prove an obstacle to the EU-facilitated dialogue for the normalisation of relations between Kosovo and Serbia.

The decision of the Kurti government prompted Belgrade and local Serb politicians in Kosovo’s north, where a majority of Kosovo Serbs reside, to organise week-long protests. The Serbian government of Aleksandar Vucic added fuel to the fire, sending in troops and flying military jets right to the border.

Kurti said that Kosovo would be ready to lift the requirements if Serbia did the same.

Ultimately, the two parties signed a temporary agreement in Brussels whereby cars travelling between the countries would be required to get stickers at the border to cover flags and country names – a measure treating both countries equally.

The two parties do not seem to have come any closer to a final solution since then.