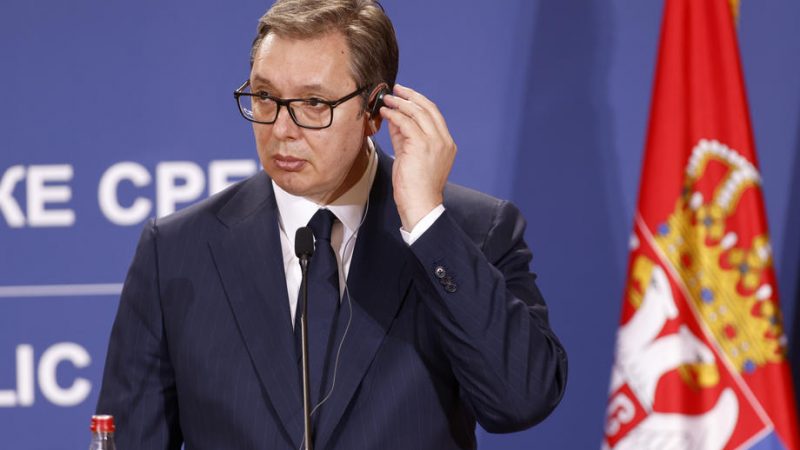 Vucic’s comments were in response to a report approved by the European Parliament’s Foreign Affairs Committee (AFET) on Tuesday (14 June). AFET’s report on Serbia concluded that a final agreement between the latter and Kosovo must end in mutual recognition. [EPA-EFE/MARKO DJOKOVIC]

Serbia has no desire to recognise Kosovo, President Aleksandar Vucic confirmed to Serbian media this week following repeated calls from the EU for mutual recognition.

Vucic’s comments were in response to a report approved by the European Parliament’s Foreign Affairs Committee (AFET) on Tuesday (14 June). AFET’s report on Serbia concluded that a final agreement between the latter and Kosovo must end in mutual recognition.

The report also urged Serbia to align its foreign policy with the EU and impose sanctions on Russia for its invasion of Ukraine.

“Mutual recognition is what the EU desires, it’s good that that’s what they desire, but it’s not what we want. And as I said – everyone has their job, they have theirs, we have ours,” he told journalists.

He added that the EU-facilitated dialogue between Kosovo and Serbia must focus on normalising relations but refused to budge on mutual recognition, a requirement both by the EU and the US.

Earlier this week, the Serbian leader expressed his surprise after German Chancellor Olaf Scholz reportedly told him that mutual recognition would be necessary for Serbia to be able to join the EU.

“We had noticed this, but, in the official negotiation process at the table, the topic has been ‘full normalisation of relations, ’ and nowhere is there talk of mutual recognition,” Vucic said to Serbian media on Monday.

Vucic was sworn in as President of Serbia on 31 May. In his speech to his supporters, he vowed to “preserve peace and stability, Kosovo and Metohija and the future of our country and our children.”

Kosovo and Serbia have been engaged in a dialogue for the so-called normalisation of relations since 2011, which has yielded poor results despite some 33 agreements signed but implemented partially and only selectively. The thorny issue of mutual recognition, vehemently opposed by Serbia, has never been on the table.