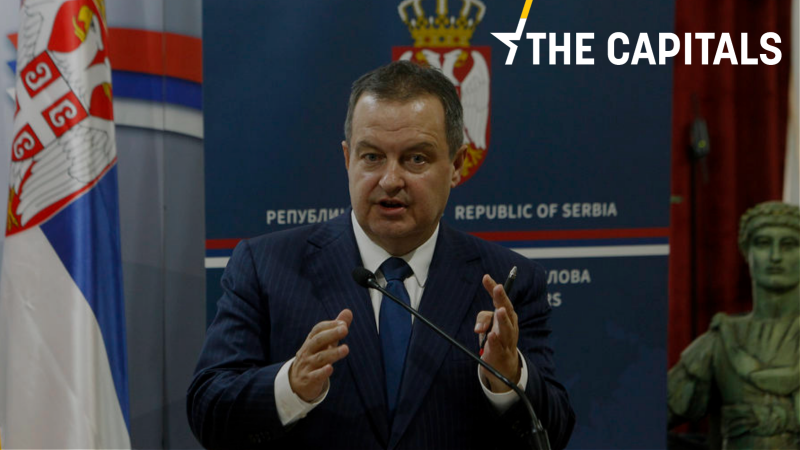 "Russia is our most influential ally for preserving our territorial integrity and sovereignty in Kosovo," Dačić said, opening a conference called, “Russia in the Balkans - A Look into the Future.” [EPA-EFE/DJORDJE SAVIC]

Serbia will never impose sanctions against “its friend Russia,” despite the pressure that it faces, Serbian Parliament Speaker Ivica Dačić said on Thursday.

“Russia is our most influential ally for preserving our territorial integrity and sovereignty in Kosovo,” Dačić said, opening a conference called “Russia in the Balkans – A Look into the Future.”

Since 2014, the EU has imposed different types of sanctions against Russia in response to the annexation of Crimea, which Serbia refused to join, using exotic arguments, including that they would harm the country’s EU accession process.

Dačić spoke about “pressure” but did not elaborate. The EU has so far denied applying such pressure. The United States is also interested in Serbia joining the sanctions policy against Moscow.

Dačić said the support that Belgrade was getting chiefly from Russia and China offered Serbia room to respond to foreign political challenges. According to him, the EU is one of Serbia’s foreign political priorities, but this did not create any dispute with Russia and posed no obstacle to mutual relations.

Foreign Minister Nikola Selaković stressed at the conference that Russia was Serbia’s biggest support in its battle to preserve its territorial integrity and sovereignty and avoid the stigmatisation of the entire Serb people.

Interior Minister Aleksandar Vulin said at the same conference Serbia would not join NATO. “While Aleksandar Vučić is the head of the state, you should have no dilemma as to what our attitude toward the NATO alliance is,” Vulin said. (EURACTIV.rs)

One response to “Serbia resists ‘pressure’ to impose sanctions on Russia”