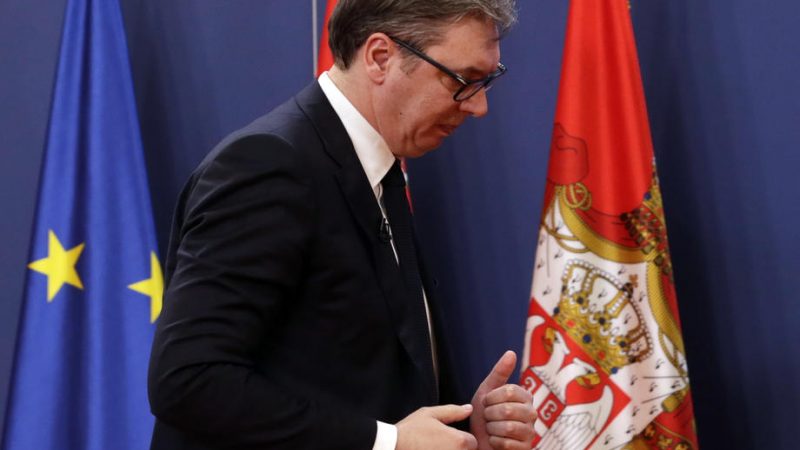 Vucic also questioned why the West is not bombing Russia like it did Serbia in 1999 as it claims that the current events in Ukraine “have never been seen before on European soil.” [EPA-EFE/ANDREJ CUKIC]

Serbian President Aleksandar Vučić has threatened to deploy a ‘strong and serious’ response if Kosovo moves forward with its application to the Council of Europe.

“The day we find out that they have officially applied for membership in an organisation, our response will be much stronger than they think and will not be just a statement to the media. Believe me, we will show you our teeth,” Vučić told local media.

The statement comes two days after Vučić met with Kosovo Prime Minister Albin Kurti in Berlin to revive the EU-facilitated dialogue for the normalisation of relations between the two countries.

Following the meeting, Kurti announced his government would apply for membership in the Council of Europe (CoE) and NATO’s Partnership for Peace programme.

Meanwhile, sources told Kosovo news agency RTK that a powerful member of the CoE is ready to extend Kosovo an invitation to the Council, and they expect Kosovo to receive membership swiftly.

In March, the European Stability Initiative (ESU), a Berlin-based think tank, urged Kosovo to apply for membership in the CoE following Russia’s suspension from decision-making in the organisation.

The think tank argued that Kosovo has all the votes it needs to join the organisation, given that 34 of its 46 members recognise Kosovo’s independence.

On Thursday (4 May), Knut Abraham, a German MP, tweeted that he had received confirmation from ministers that Germany is ready to support Kosovo’s membership bid.