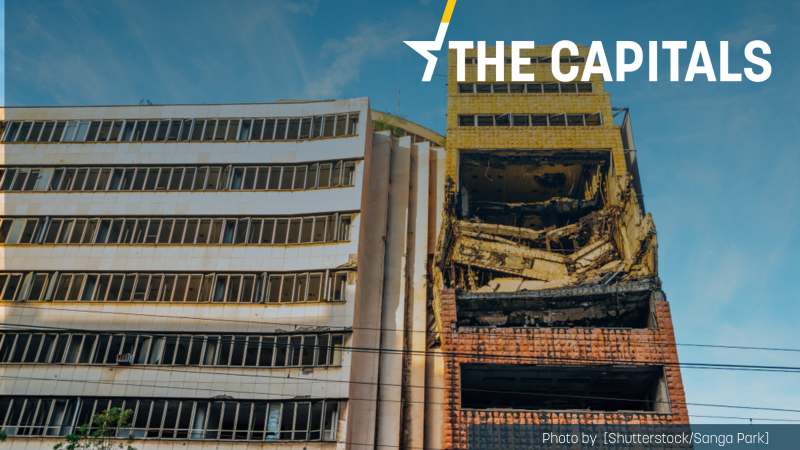 Serbia is a candidate country to join the EU and is expected to align with the bloc on foreign matters. [Shutterstock/Sanga Park]

Serbian President Aleksandar Vučić said he would condemn Russia’s recognition of the independence of separatist regions in eastern Ukraine if Ukrainian President Volodymyr Zelenskyy condemns NATO’s bombing campaign against Serbia in 1999 on television.

His statement comes in response to Ukrainian Ambassador Alexander Alexandrovich, who said Ukraine and the Ukrainian people expected Serbia to condemn Russia’s recognition of Donbas’ independence.

“We are a small country and do not want to do away with the possibility of continuing our friendships with some [countries], and we do not decide in any way on Ukraine’s fate,” Vučić told Pink TV on Tuesday in Monaco.

“However, if it is like that, I invite Mr. Aleksandrovich to call the president of his country Mr. Zelenskyy and ask him to condemn as early as this evening on television the horrific and tragic aggression against Serbia by the US, the United Kingdom, Germany and other countries and I am sure that he will do so. As soon as he does this, I will gladly accept his invitation and answer his pleas,” he added.

The Serbian president also reiterated that his country was militarily neutral but that its policies were not, and he would not forgo traditional friendships.

“Serbia has always supported Ukraine’s integrity, and there has been no change in that respect,” he added.

He said that pressure has already been exerted on Serbia to impose sanctions against Russia over the Ukraine crisis, adding he is expecting pressure to mount.

Vučić also said he was not pressured over this matter during a meeting on Monday with his French counterpart Emmanuel Macron, noting that Western Balkan matters were on the table.

Russia’s decision to recognise the independence of Ukraine’s breakaway regions of Donetsk and Luhansk would change the overall global security structure, he added, expressing concerns over the situation and stressing that Serbia’s position was uncomfortable.

Serbia is a candidate country to join the EU and is expected to align with the bloc on foreign matters.

In practice, this has not always been the case. According to European Commission data, in 2020, Serbia’s alignment rate with relevant High Representative statements on behalf of the EU and Council Decisions stood at 56%, but rose to 61% as of August 2021.

Earlier this week, Vučić said “Serbian people do not want and will not have NATO”.

Overall, the Western Balkan region is worried about potential spill-over effects of the escalation at the Russia-Ukraine border, especially after a statement made by Russia’s Foreign Minister Sergey Lavrov who alleged mercenaries from Albania, Kosovo, and Bosnia and Herzegovina have been recruited and transferred to Donbas in Ukraine to fight against Moscow-backed rebels.

Local governments have denied Moscow’s claims, but analysts have concerns that allegations of this kind could be used to destabilise further already fraught relations between Serbia, backed by Russia, and Kosovo, supported by the US.

Similar worries have been raised in BiH, where tensions are simmering between the Croat and Bosniak factions and the Serb-entity Republika Srpska.

Kosovo President Vjosa Osmani has stated concerns that Russia will use Serbia, its closest ally in the region, to destabilise the Western Balkans.

Osmani made the statement to local Kosovo media following her participation in the Munich Security Conference.

The concerns come after Russia has accused Kosovo, Albania, and Bosnia and Herzegovina of sending mercenaries to Ukraine. A statement from the Russian Intelligence Services, sent to Exit by the Russian embassy in Tirana states that the UK and US are paying Western Balkan mercenaries $3,000 a month.

Western Balkan countries have refuted the claims as absurd and “fake news”.

“Kosovo will always side with the European Union, the United States, and NATO,” he said.

Meanwhile, Vučić has warned that the crisis in Ukraine may spread further into Europe and especially the Balkans.

Vučić commented on the situation shortly after Russian President Vladimir Putin signed a decree recognising the independence of Donbas.