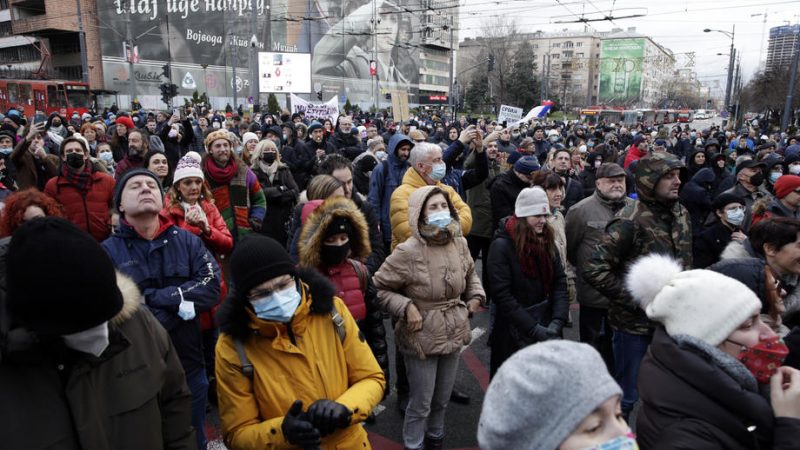 Protestors from environment groups block the streets in front of the government headquarters during a protest against Rio Tinto's plans to open a lithium mine in Belgrade, Serbia, 18 December 2021. [EPA-EFE/ANDREJ CUKIC]

Some of the main roads in Serbia were blocked on Saturday in protest at the possible opening of a lithium mine in western Serbia, as part of Rio Tinto’s Jadar Project.

Several hundred citizens blocked the highway outside the Sava Centre congress hall in Belgrade for an hour. No police officers in uniform were seen at the rally.

Around 200 people blocked the highway near Novi Sad in both directions, from and to Belgrade. An incident occurred when a driver tried to break through the blockade.

The blockade of the Ibarska Highway in Preljina, near Čačak, where roughly 100 citizens gathered, lasted two hours and passed without violence. The Požega-Kosjerić road was blocked in the small town of Pesak, in protest at geological excavation, exploitation and the opening of a lithium mine in the village of Dobrinje and in other places in Serbia.

The renewed protests come after several weeks of nationwide demonstrations in December. Thousands of Serbians took to the streets to protest against the government’s plans for the mine and an expropriation law which President Aleksander Vuvic eventually did a U-turn on. New protests suggest that was not enough and that people remain unhappy with environmental issues in the country.