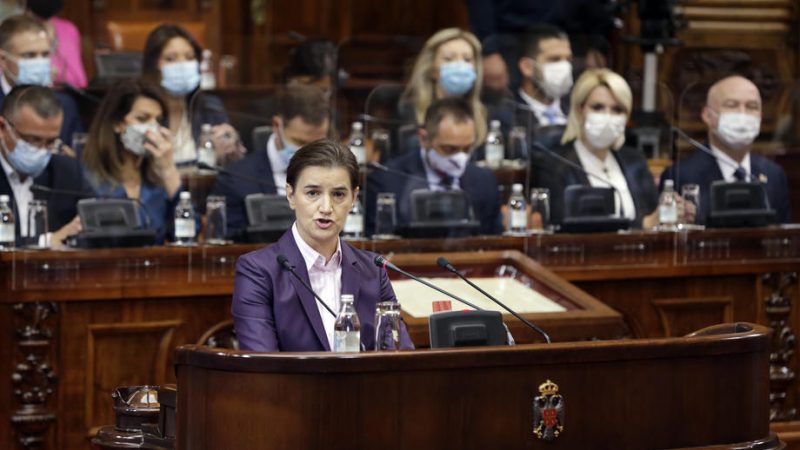 Serbia’s parliament on Wednesday elected a new government led by Serbian Prime Minister Ana Brnabić with 227 votes in favour, five against and 16 abstentions.

Presenting the new government’s platform, re-elected Prime Minister Ana Brnabić promised a pro-European cabinet that would support the political and economic continuity of the government to make Serbia stronger, as well as improve the quality of life for its citizens.

“Serbia is a stable state today, financially and economically. The national unemployment rates have dropped to a record 7.3% low, the average net salary is over €500, while wages and pensions are increased continuously. Serbia has stepped into a period of stable growth, and its growth rates are among the highest in this part of Europe. The odds are it will be the highest this year,” Brnabić told Serbian MPs before the vote.

The PM listed six major goals for her new cabinet: fighting the coronavirus and strengthening the national healthcare sector, protecting the interests of Serbs in Kosovo and Metohija, fighting organized crime and an all-out war against the mafia, protecting the country’s independence and independent decision-making, securing the rule of law and stepping up reforms to assist in Serbia’s EU accession procession, and solidifying Serbia’s economy.

In other news, Serbia’s public enterprise sector constitutes a risk to the state’s fiscal position and the national economy, Private Sector Development Specialist at the World Bank Country Office in Serbia, Duško Vasiljević, has warned.

Speaking at the forum “What Makes Serbian Public Enterprises Loss-Makers?” the World Bank representative said that losses made in the sector had placed a heavy burden on the state.

“The losses are levelled by either direct subsidies to these companies, tax defaults, unpaid social transfers or dues to other public companies,” Vasiljević explained.

The WB specialist underlined that the operation of public enterprises had to be improved, along with their transparency and accountability. “A good framework for the corporate management of public companies is crucial,” added Vasiljević.