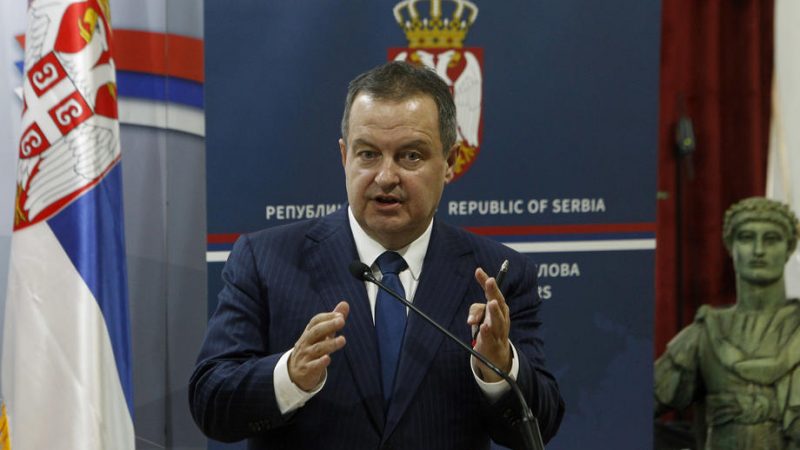 Dačić signed the Decision to call a nationwide referendum on confirming the Act on Amending the Constitution following a session of Parliament. [EPA-EFE/DJORDJE SAVIC]

Serbian Parliament Speaker Ivica Dačić has called for a referendum on amending the country’s Constitution to be held on 16 January 2022.

Justice Minister Maja Popović stated on Wednesday that the proposed constitutional changes pertain to part of the justice system and that their “goal is to increase [the Serbian people] legal security because only an independent judiciary and an autonomous public prosecutor’s department can guarantee the protection of rights in court proceedings.”

To eliminate the role of politics in the election of judges and prosecutors, the minister explained, the amendments stipulate that a High Judicial Council elect judges, instead of by Parliament, as is the current practice.

The changes also stipulate that prosecutors be elected by a High Prosecutorial Council comprising 11 members: five chosen by prosecutors, four proposed by a parliamentary committee and confirmed by a two-thirds majority in Parliament, and the chief public prosecutor and minister of justice ex officio. The other proposed changes refer to the permanence of the office of judge, the strengthening of the office of the prosecutor, and reverting the name of the country’s highest court to the Supreme Court from the current Supreme Court of Cassation.

The Venice Commission, which is the Council of Europe’s expert body for constitutional law, stated earlier in an opinion about the revised draft amendments to the Constitution of Serbia that the majority of its previous recommendations had been fulfilled, but stressed that it was necessary to lower the risks of the High Judicial Council and the High Prosecutorial Council being influenced by politics.