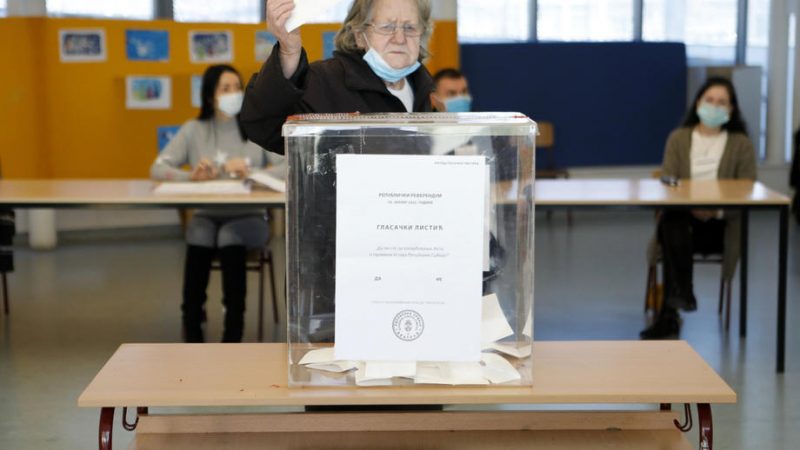 A woman casts a ballot during the referendum on constitutional changes in Belgrade, Serbia, 16 January 2022. Voters in Serbia decide on whether to change the constitution to create a more independent judiciary in line with the European Union standards, needed for Serbia's EU membership bid. [EPA-EFE/MARKO DJOKOVIC]

Unofficial results say 61.84% voted ‘yes’ in the referendum on changes in the election of judges and prosecutors, which Serbia says should boost the independence of courts and the country’s EU bid. However, turnout was estimated at a little over 30%.

“The EU welcomes the completion of this important step in the Constitutional reform to strengthen the independence of the judiciary, in line with Serbia’s strategic choice to accede to the European Union”, said an EU spokesperson.

The low turnout should not be interpreted as an increasing anti-European sentiment in the Serbian public, although the fervent and frequent pro-Russian and pro-Chinese messages from the Serbian leadership could impact the public.

Rather it is the result of a poorly explained referendum issue.

Prime Minister Ana Brnabić explained on Saturday evening, too late, that the referendum is not about the Constitution preamble (i.e the status of Kosovo), or the Rio Tinto mine (protests against lithium extraction) or vaccination.

Low turnout is not the result of the opposition’s call to stay at home or vote “no” either.

For the time being, the opposition continues to be a third-row player.

So, the referendum results do not suggest a radical change in the upcoming April elections, presidential and parliamentary.

Instead, the strongest hit to President Aleksandar Vučić and his Serbian Progressive Party (SNS) is Kosovo’s decision to block Serbs in the former Serbian province that declared independence in 2008 from voting.

“The EU regrets that it was not possible to find an agreement with the government of Kosovo allowing the Organisation for Security and Cooperation in Europe (OSCE) to collect the ballots in Kosovo, in accordance with past practice,” the EU spokesperson said.

Pristina’s strategy is obvious: Denying Kosovo Serbs’ the right to vote in a Serbian referendum confirms Kosovo is an independent state.

Citizens of other states can vote in diplomatic and consular missions, but Serbia does not have them in Kosovo.

If Pristina could repeat this scenario in April, that would be an even bigger blow to Belgrade, with serious consequences for the EU-sponsored Belgrade-Pristina normalisation talks.