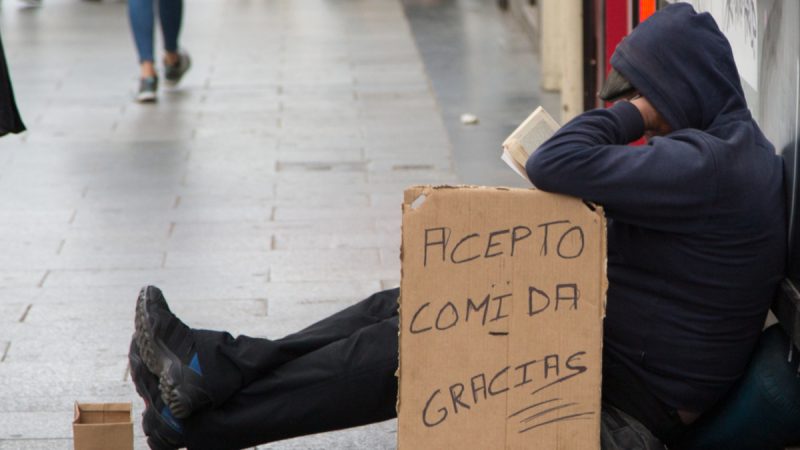 11 million Spaniards now live now in a situation of “social exclusion”, 22.7% more than in 2018, the report warned. [Shutterstock/M.Eugenia_Lopez]

The economic and social side effects of the COVID-19 crisis have been devastating for Spain, with six million citizens living in severe poverty and 11 million at risk of social exclusion, according to data from a report released on Wednesday by the Catholic NGO Caritas.

The impact of the COVID-19 crisis has dragged 2.5 million people in Spain into acute poverty. The number of households with serious economic problems due to the lack of employment of their members and the consequent income reduction has doubled since 2020, the Caritas report “Expelled society and right to income”/”Sociedad Expulsada y Derecho a Ingresos” revealed.

Meanwhile, 1.147 million people have $1m or more for the first time in recent history, according to the latest Global Wealth Report published by Credit Suisse. According to Credit Suisse’s estimations, this accounts for 2% of the world’s millionaires, and the number is expected to increase to 1.8 million by 2025.

11 million Spaniards now live in a situation of “social exclusion”, 22.7% more than in 2018, the report warned. The post-pandemic situation looks “bleak and very worrying” for Spain, the NGO stressed.

Caritas advanced only the first conclusion of its flash study on the social effects of the pandemic in Spain. It analysed over 7,000 households in several Spanish regions, but the final data won’t be available until January 2022.

The report also stated that only four of ten Spanish households currently enjoy full social and economic integration, 7.4% less than in 2018, the report added.

The most vulnerable, Caritas-Spain stressed, have been “those who did not receive the benefits of the economic growth when the recovery from the great recession arrived in 2018”.

The COVID-19 crisis has ensured that over six million people live in severe social exclusion for the first time since 2007 – a 33.3% increase compared to just three years ago.

These families suffer what experts have described as “an accumulation of serious limitations”. Among other things, these families have to deal with working precarious jobs, not being able to pay their housing expenses or eat meat or fish twice a week, or not keeping their home heated in winter.

“A first conclusion (of the report) is that there has been a shift of the different strata of the (Spanish) society towards situations of greater precariousness and social exclusion, an unstoppable trend towards a more unequal society”, said Thomas Ubrich, one of the report’s authors on Wednesday, as quoted by Spanish media.