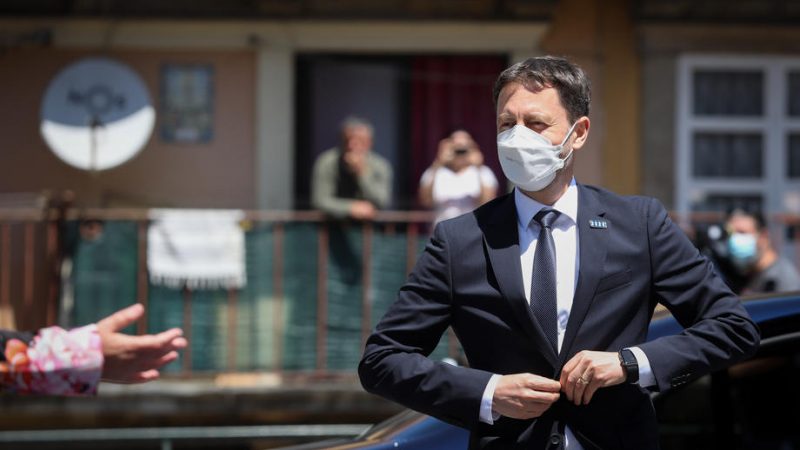 Slovakia Prime Minister Eduard Heger arrives to attend the EU Social Summit with Heads of State and Government, social partners and other participants held at Alfandega do Porto in Porto, Portugal, 07 May 2021. [EPA-EFE/JOSE COELHO]

Slovakia’s Prime Minister Eduard Heger held a secret meeting with ten of Slovakia’s top-ranking state representatives at the headquarters of the Slovak Secret Service (SIS), to discuss the possibility that the investigation of major corruption cases could be manipulated, Dennik N said.

The meeting, initiated by Heger, included SIS Director Michal Aláč and President Zuzana Čaputová. It was called after Heger received information from SIS, which claims its former director Vladimír Pčolinský who has been charged with two bribery cases and is currently in custody, revealed a police conspiracy, resulting in The National Criminal Agency (NAKA) retaliating with his arrest. Many investigators are saying this is an attempt by Pčolinský to save himself.

This high-level meeting coincides with the We Are the Family party urging the shortening of the maximum length of pre-trial detention, in which Pčolinský currently stays, as they have doubts on his investigation and detention. This case led to another coalition crisis, during which Justice Minister Mária Kolíková threatened to leave the government if the parliament, with the help of the opposition, approved or moved We Are Family’s proposal to the second reading.

Party leader Boris Kollár says Interior Minister Mikulec (OĽaNO) and his nominee, Police President Kovařík, are responsible for the intervention. This suggests the possibility of growing tension between We are the family and OĽaNO, the two parties that did well in the four-party coalition even during the last government crisis. (Irena Jenčová | EURACTIV.sk)