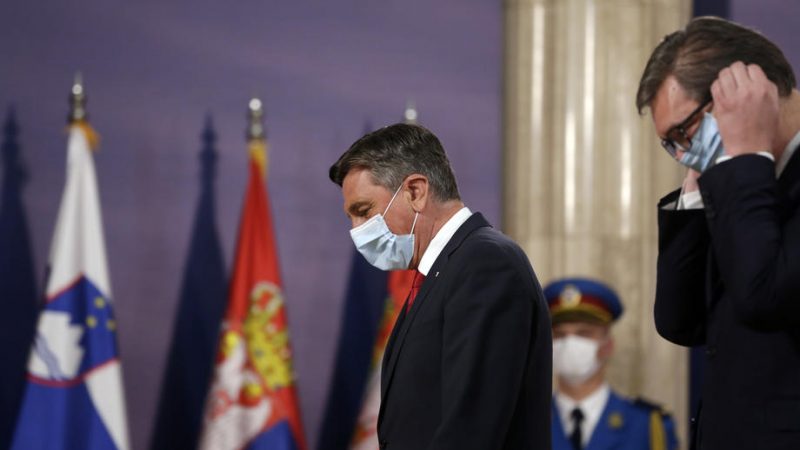 For his part, Vučić said that Serbia was on the path to the EU and supported everyone else on this path. [EPA-EFE/ANDREJ CUKIC]

The integration of all Western Balkan states with the EU would secure peace and stability in the region, said Serbian President Aleksandar Vučić and Slovenian counterpart Borut Pahor in Belgrade on Friday.

“The EU must have the entire Western Balkan region before its eyes, and it would be brilliant if all of the states of the region could join the Union at approximately the same time. If I’ve understood you correctly, President Vučić, I must say that we agree that only this kind of an approach can secure peace and stability, which is in the best interest of everyone, differences notwithstanding,” the Slovenian president told reporters.

At a joint press conference held with his Serbian counterpart, Pahor also said that Slovenia, which is poised to take over the EU’s six-month rotating presidency on 1 July, wanted to caution leaders of EU countries that a new enlargement strategy was needed, one that would underline the geopolitical dimension of the process.

Vučić meanwhile said that Serbia was on the path to the EU and supported everyone else on this path.

“We believe it is important that we all take care of the region together because here we are all here next to each other. We have nothing against an integral approach,” Vučić said, adding that Serbia was in favour of a dialogue with Kosovo because frozen conflicts “end in hundreds and hundreds of deaths.” (EURACTIV.rs | betabriefing.com)