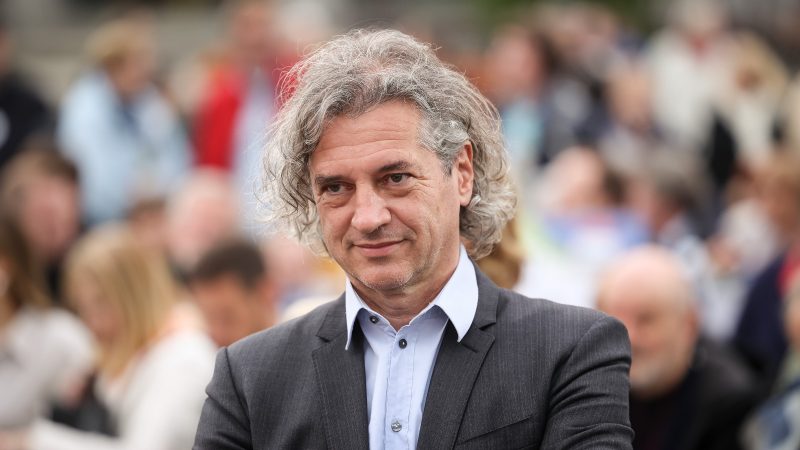 Golob has indicated he will reach far and wide as he seeks to fill top government posts with a barely three-month-old party. [Nebojša Tejić/STA]

Former energy executive Robert Golob’s Freedom Movement is expected to start coalition talks on Tuesday after winning the general election by a landslide.

Golob has indicated he will reach far and wide as he seeks to fill top government posts with a barely three-month-old party.

Freedom Movement’s natural coalition partners are the Social Democrats and Left, which respectively won seven and five seats. Still, he told local radio on Monday (25 April) that he would also talk to two centre-left parties voted out of parliament, the Marjan Šarec List and Alenka Bratušek Party, both headed by former prime ministers.

“I think that a coalition is much more. It means cooperation for the good of our society, and cooperation does not depend only on how many deputies one has, but on how professional and knowledgeable the staff are,” he told Radio Koper.

Political analysts have wondered how Golob’s party would find staff for top posts. By reaching out to parties now reduced to minnows, he gets access to individuals who have experience in government, with the added potential for further consolidation of the fragmented centre-left.

The Freedom Movement’s priority portfolios will be the ministries of health and finance and a merged infrastructure and environment ministry. Golob said the party already had candidates for these departments.

Freedom Movement Vice-President Marta Kos, a former ambassador to Switzerland, is billed as the next foreign minister. “We will need people who are ready to work hard for Slovenia. I’m one of these people,” she said.

In recent weeks, the media have speculated that the Social Democrat President and member of the European Parliament, Tanja Fajon, could be interested in the same post.