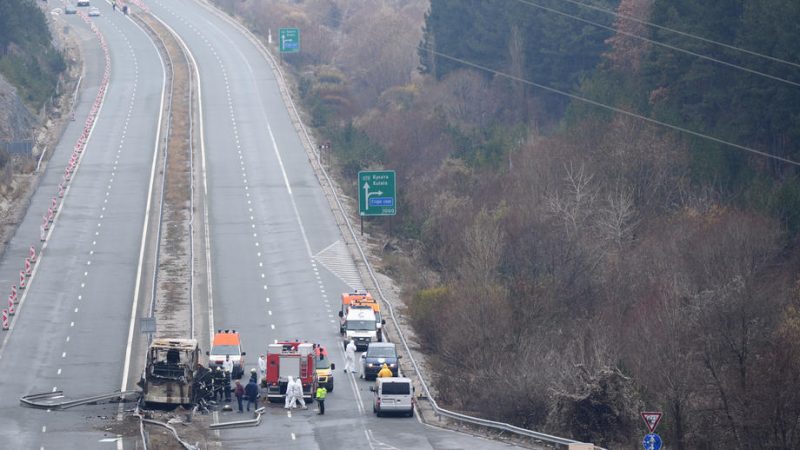 Fire fighters, police officers and investigators inspect the wreckage of a North Macedonia-registered bus that caught fire after crashing along a highway, killing at least 45 people, near the village of Bosnek, Bulgaria, 23 November 2021. [EPA-EFE / VASSIL DONEV]

North Macedonia and Bulgaria simultaneously declared a period of national mourning after 46 people died in a bus fire on Bulgaria’s Struma highway, about 50 kilometres south of the capital Sofia. The seven who managed to escape before the bus burned completely are in a stable condition in hospital in Sofia.

The bus was travelling from Istanbul to Skopje on Tuesday morning when it crashed on the Struma highway and caught fire at around 2 am. Survivors also reported an explosion, although the cause and exact timeline has not been established yet.

“A terrible tragedy,” North Macedonia Prime Minister Zoran Zaev said at a joint briefing with Bulgarian counterpart Stefan Yanev. He thanked the Bulgarian authorities for doing everything to protect the lives of the survivors. “We will be very grateful for the investigation of this tragedy,” Zaev added.

“We are together in good and bad; we are first neighbours, brotherly peoples, we share joys and sorrows. Every time we help each other in good and bad. I hope this tragedy will have a positive impact on relations and unite us even more,” Zaev said.

In North Macedonia, the government has declared three days of national mourning, and all flags are flying at half-mast.

“This is a tragedy that shook us,” said Bulgarian Prime Minister Stefan Yanev.

“The picture is appalling. Тhe people on the bus are piled and burned to ashes,” said  Interior Minister Boyko Rashkov.

The survivors were in the rear of the bus and managed to break the window and escape, said Zaev after visiting Sofia’s Pirogov Hospital, where the survivors are being treated.

The accident is likely to have been caused by human error, or a technical failure of the bus, the director of the Bulgarian National Investigation Service Borislav Sarafov said.

Investigators are trying to determine whether something exploded in the bus and caused the crash or whether the impact triggered an explosion.