Some Spanish regions extend COVID-19 measures as others relax them 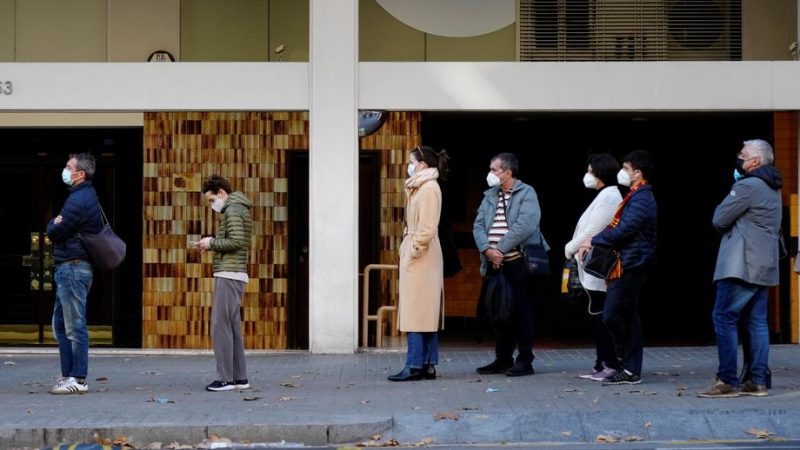 According to fresh data released by the health ministry, the cumulative 14-day incidence per 100,000 inhabitants stands at 3,286 cases. [EPA-EFE/Enric Fontcuberta]

Some regions have decided to extend the extraordinary COVID-19 measures, while others opted to gradually relax them to reach a “new normal”.

La Rioja, Andalusia, Navarre, the Canary Islands and Galicia will extend until the end measures until the end of the month, while Catalonia and Cantabria have opted to stop with nightly curfews and the mandatory use of COVID certificates to enter bars, restaurants, and other public spaces, EURACTIV’s partner EFE reported.

The decision of some of the 17 Spanish regions to relax these measures coincides with a slight improvement of the COVID incidence rate in the last 48 hours, after eleven weeks of increases, EFE reported.

According to fresh data released by the health ministry, the cumulative 14-day incidence per 100,000 inhabitants stands at 3,286 cases.

This should be analysed with “caution” to see if “we have reached the peak of the sixth wave or we are very close”, said Health Minister Carolina Darias.

While the sixth wave of the pandemic keeps its growing trend in Catalonia, although with less intensity, the regional executive known as the Generalitat confirmed Tuesday that it would lift the nightly curfew from 1 am to 6 am.

This measure was implemented before Christmas, with a seven-day cumulative incidence of 500 cases, at a time when more than 1,300 people were admitted to hospitals with COVID-19.

Meanwhile, a Spanish COVID-19 vaccine, developed by pharma company Hipra, is expected to receive the authorisation of the Spanish Agency for Medicines and Health Products (AEMPS) to move on to phase III of its clinical trial, a step before its commercialisation, scheduled for the second quarter of the year, EFE had reported.

Phase III will involve 3,000 volunteers from around twenty hospitals, seventeen in Spain, two in Portugal and one in Italy, company sources explained on 7 January, EFE had reported.

Hipra is confident that the vaccine can be ready before the summer and hopes to market it in the EU after receiving the approval of the European Medicines Agency (EMA), EFE had reported.

The company will have a production capacity of 600 million doses by 2022, which will serve as a booster for any of the four other vaccines currently available in Spain – Pfizer, Moderna, Novavax and Johnson & Johnson.