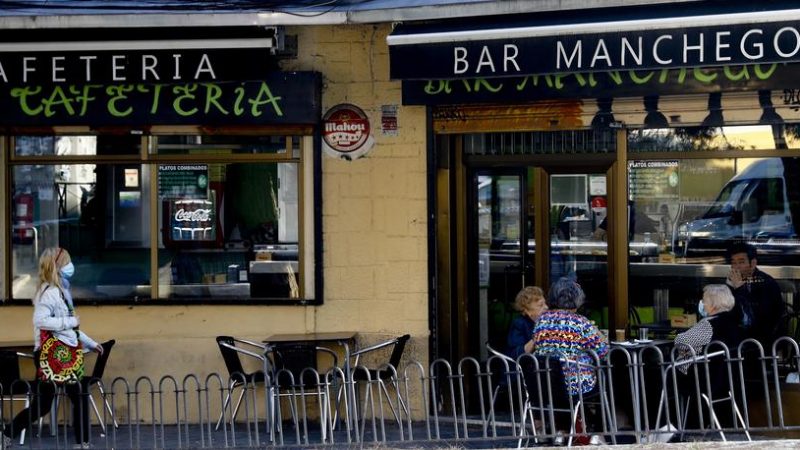 A group of elders drink coffee at a terrace in Usera district in Madrid, Spain, 22 September 2020,. [EPA-EFE/BALLESTEROS]

The Spanish government is proposing to adopt fresh measures to subsidise every company, in particular SMEs, as long as they hire the long-term unemployed over the age of 45, in a hope to create new jobs after being hit hard by the COVID-19 pandemic.

Spain’s unemployment rate jumped to 16.26% in this year’s third quarter, according to official data released in October.

According to a draft Royal Decree currently under discussion, Spanish companies would benefit from subsidies if they offer permanent contracts to long-term unemployed workers, EFE reported.

The text of the new regulatory measure reads that a Spanish company would be eligible for a special subsidy of  €4,500 (per person) if the unemployed worker hired is a woman, over the age of 45, disabled or belonging to any other vulnerable group, as determined by Spain’s Public Employment Service (SEPE), Cinco Días reported.

The new subsidies may go up to € 7,000 (or €7,500 if they are women over 45 with disabilities) when employment contracts are concluded with people over the age of 45 who long-term unemployed and “at risk” of social exclusion, among other special cases.

Spanish Labour Minister Yolanda Díaz (left-wing Unidas Podemos/United We Can), has already started negotiations with all social partners (mainly Spanish trade unions and companies) with the objective of reaching an agreement on the draft proposal before the end of the year.

The target of the Spanish government (a coalition of socialists and Unidas Podemos) is focused on improving active employment policies, such as training, guidance and the social integration of unemployed, long-term unemployed and helping those employed to improve their capabilities. (EUROEFE (Madrid))