Spain’s PP party to govern Castilla and León alone, with VOX wanting ‘piece of the pie’ 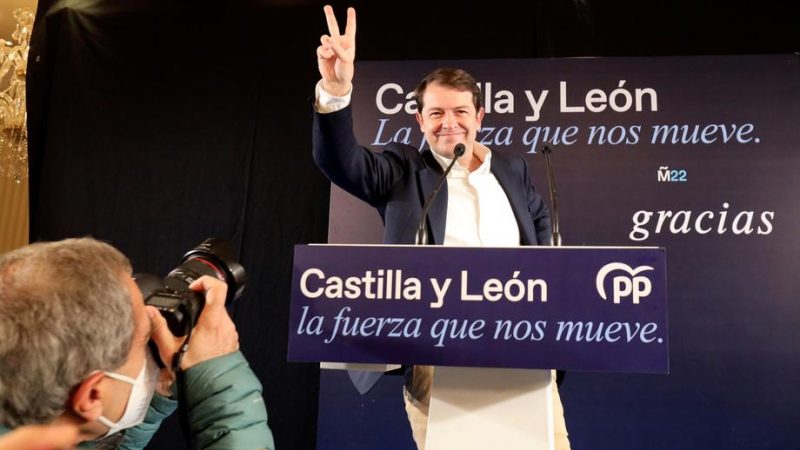 Alfonso Fernández Mañueco, the leader of the centre-right Partido Popular (PP) in Castilla and León, Europe’s largest region, on Monday reaffirmed his will to govern alone after his party secured a narrow victory in Sunday’s local election.

Vox, the third force in the Spanish parliament after the socialist PSOE and the PP, achieved record results in the ballots on Sunday that could see the right-wing nationalist party form a coalition with the PP, which fell short of a majority in a region it has ruled for 35 years.

The PP won the most votes securing 31 seats, two more than it had but still not enough for an absolute majority, meaning a coalition with Vox, which secured 13 seats, will be required to govern, EURACTIV’s partner EFE reported.

PSOE took 28 seats, with some analysts considered this early election in Castilla and León a “political appetiser” ahead of the election in December 2023.

The PP had brought forward the Castile and Leon (northeast) elections, confident that the demise of centre-liberal party Ciudadanos (Citizens), until now its partner in government, would secure them a comfortable majority.

On Monday, Fernández Mañueco, acting president of the ‘Junta’ (the regional executive) and PP candidate for re-election, insisted on governing alone.

However, Vox has warned that it wants to enter the regional executive to implement its own policies. Among other initiatives, the far-right party wants to repeal a law against gender violence and the Historical Memory Law (Ley de Memoria Histórica).

The law, approved in 2007, formally condemns the repression of the Franco regime and gives some rights to the victims and the descendants of victims of the Civil War and the Franco dictatorship.

Fernández Mañueco acknowledged that his objective is to seek a “solo government”, although he also admitted that he does not rule out having to form a coalition government after “dialogue and negotiation” with other parties, without ruling out Vox.

In an interview with private radio station Onda Cero, he stressed that the weight of the negotiation would fall on the PP and denied having received any instructions from PP’s secretary-general, Pablo Casado, not to mention Vox or not to include this party in the negotiations.

On the tightness of PP’s victory, Mañueco said that “the one who scores the goal, even if it is in the 93rd minute, is the one who wins”.

Meanwhile, Vox’s candidate for the presidency of the ‘Junta’, Juan  García-Gallardo, stressed that the election results indicate that his party has “the right and the obligation to enter the government of Castilla and León”.