Spanish coalition split over decision to deliver weapons to Ukraine 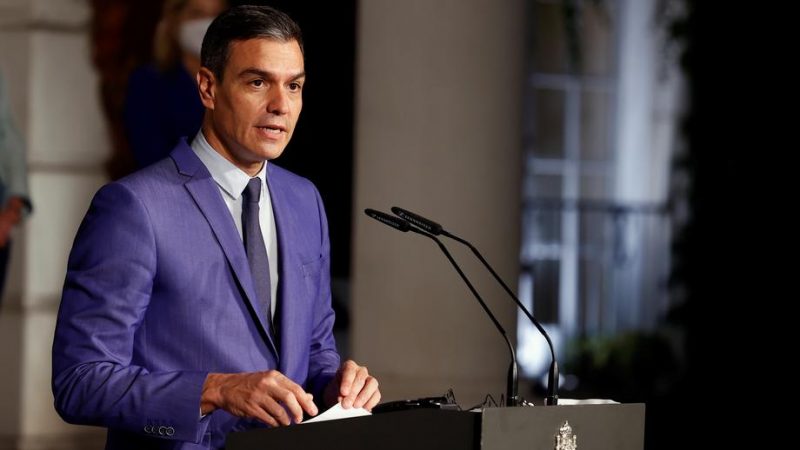 Spain has the largest network of regasification plants in Europe, critical infrastructures in the current energy crisis because of their capacity to unload liquefied natural gas (LNG) shipments, at a time when the energy supplies from Russia are at risk of being halted. [EPA-EFE / Chema Moya]

Prime Minister Pedro Sánchez on Wednesday confirmed that Spain would soon send lethal weapons to help Ukraine’s resistance against the Russian invasion. Still, his tougher position in the crisis has encountered criticism from left-wing coalition partner United We Can (Unidas Podemos).

In an interview aired Monday by state-owned television RTVE, Sánchez said Spain had the intention to send only “defensive” material to Ukraine in the framework of the EU Peace Initiative. However, due to the fast escalation of the conflict and the increasing pressure from centre-right opposition parties, he has modified his position.

This is not the first dispute between the two coalition partners, PSOE and Unidas Podemos, on the Ukraine conflict. Last January, the government’s spokeswoman had to ask Podemos to show “containment” in its statements and not jeopardise Spain’s relationship with NATO.

Sánchez on Wednesday stressed that he believed in a coordinated EU response to the crisis as the best way to help Ukraine, but, after fierce criticism from centre-right Partido Popular (PP), liberals of Ciudadanos (Citizens) and the far-right VOX, he decided to finally “deliver offensive military material to the Ukrainian resistance”, EURACTIV’s partner EFE reported.

However, the move was rejected by key members of Unidas Podemos. Ione Belarra, minister of Social Rights, and Equality Minister, Irene Montero, criticised the decision and said sending arms to Ukraine will only aggravate the conflict.

“With all loyalty, we think that sending (Spanish) arms is a mistake”, said Pablo Echenique, Unidas Podemos’s spokesperson in parliament.

In Echenique’s view, arming the Ukrainian civilian population against a professional army will not change the current imbalance of forces and will only escalate the war.

Despite the internal division, Unidas Podemos sources on Wednesday said that if they had to vote in the parliament on sending arms to Ukraine, they would do so.

“The ‘no to the war’ in Iraq is the no to Putin’s war”, Sánchez told Parliament.

In his intervention in Parliament on Wednesday, the PM submitted to the Chamber a national response plan to the economic effects of the war, which includes social measures, focused on mitigating the effects of the crisis on the most vulnerable, mainly targeting a reduction of the energy bill for the poorest, EFE reported.

The war in Ukraine will have serious consequences for the Spanish and EU economies and it will require “sacrifices”, he also warned.

Sánchez announced that Spain will push for the inclusion of Russia on the list of international tax havens and conveyed Spain’s support for the closure of the pro-Kremlin Russian media Sputnik and Russia Today.