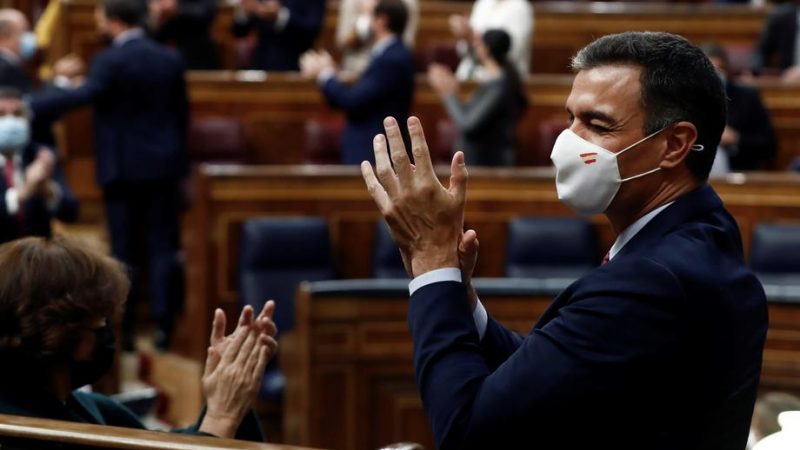 Spanish Prime Minister Pedro Iglesias (R) applauds after a non-confidence motion, issued by far-right Vox party, was rejected in a vote at the Congress of Deputies in Madrid, Spain, 22 October 2020. [EPA-EFE/Mariscal]

An attempt by Spain’s far-right party Vox to table a no-confidence motion against the government of Prime Minister Pedro Sánchez flopped on Thursday after two days of heated and divisive debate in the middle of the COVID-19 pandemic.

Vox leader Santiago Abascal’s bid to become prime minister by removing Sánchez from office failed as his motion only garnered the support of 52 Vox MPs, falling short of the required 176., EUROEFE reports.

In addition to the coalition parties of socialists (PSOE) and left-wing Unidas Podemos (United We Can), a string of smaller parties including Catalan and Basque separatists also voted against the motion.

The Popular Party’s 89 MPs also shot the motion down. Its leader, Pablo Casado, had held his cards close to his chest for weeks, declining to say whether the bastion of Spanish conservatism would abstain or vote to block the no-confidence motion despite the party governing several regional chambers with Vox, including in Madrid, Andalusia and Murcia.

Casado used Thursday’s debate to draw a line in the sand between his party and Vox and presented the PP as a “calm, sensible, moderate, responsible and pro-European” alternative to the current government despite the governing parties having previously accused him of pandering to the far-right to chase lost votes.

PSOE, Podemos and a number of political analysts viewed the motion as a ploy by Vox to exert dominance over the right-wing of Spanish politics by forcing the Popular Party (PP) to state its intentions in a no-confidence vote destined to fail.

Casado, although severely critical of Sánchez’s government, said the PP “did not want to be another party of fear, anger and provocation” but rather one of “liberty and harmony”.

Abascal said the PP’s decision was a blow to the hopes of millions of Spaniards that both parties could work together.

Abascal took aim at Sánchez in several areas, from his government’s handling of the coronavirus pandemic just as Spain had passed the 1-million-mark.

The Vox leader also took aim at the PM’s reliance on Catalan and Basque separatists to pass legislation and the government’s support of the historical memory law, which looks to address the victims of the Spanish Civil War (1936-39) and dictatorship of Francisco Franco.

“You are not the saviour of Spain. You have too much pride and too little modesty,” replied Spain’s prime minister.

Spain’s left-wing parties described Vox as “fascist” and accused it of stirring up hatred.

“Any migrant worker who goes to work every day to provide for their family has more dignity and is more patriotic than each of the far-right MPs,” said Podemos leader and deputy prime minister Pablo Iglesias.

However, Abascal said Iglesias, a Republican, had brought shame to Spain and its flags for his attacks against the royal family.