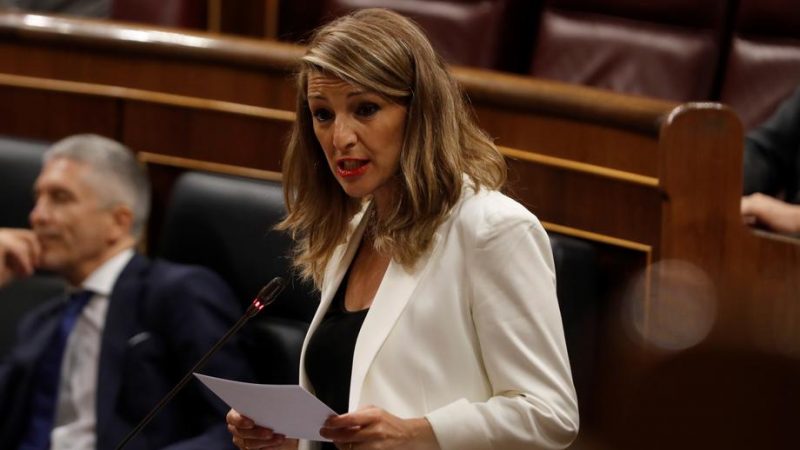 The measure approved by the Spanish executive, a coalition of the socialist party (PSOE) and left-wing Unidas Podemos (United We Can). [EPA-EFE/ J.J.GUILLEN]

The Spanish government approved on Tuesday an increase of the minimum wage to €965 per month. This is in line with the recommendations made by the European Commission to reduce wage differences across the bloc.

The measure approved by the Spanish executive, a coalition of the socialist party (PSOE), and left-wing Unidas Podemos (United We Can) was backed by Spain’s two main trade unions (UGT and CC.OO). The employer’s association (CEOE) and the Spanish Central Bank (Banco de España) rejected the agreement.

The minimum wage, termed “Salario Mínimo Interprofessional” (SMI) in Spanish, will rise retroactively from 1 September by €15 per month to €965 in fourteen annual payments, an increase of 1.57%, EFE reported.

The country’s main trade unions, who still consider the increase insufficient, have nevertheless accepted it because the government expressed its commitment to continue raising the minimum wage in 2022 and 2023. The final goal is to reach 60% of Spain’s current average salary, or €1,700 gross, which is the figure recommended by the European Commission.

In 2021, the gross minimum wage recorded in 21 EU countries went from €2,202 per month in Luxembourg to €332 in Bulgaria, according to Eurostat.

While Spain ranks among the ten EU countries with the highest minimum wage, it would still have to raise it to about €1,049 per month to reach the 60% figure recommended by the Commission.

But according to the employers’ association, CEOE, the time is not yet ripe for this new SMI increase because the economy is still weak after the pandemic.

The Bank of Spain warned that the increase could be a hurdle to promote growth, particularly for sectors that have been seriously hit by the pandemic, such as tourism.