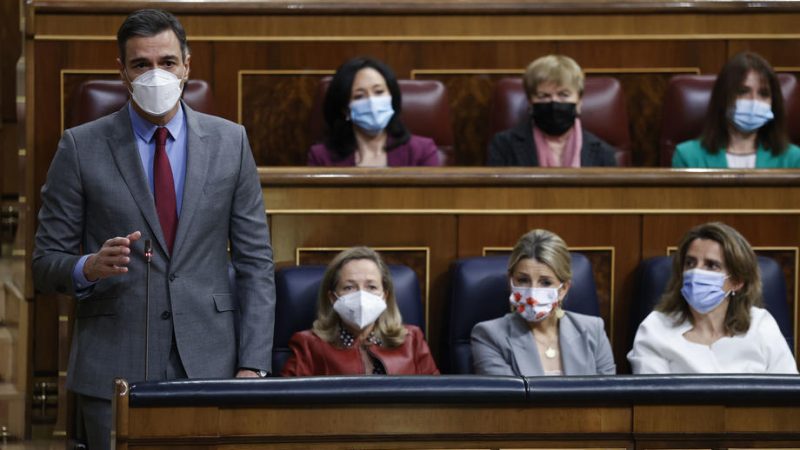 Sánchez reiterated his commitment to following other NATO members, such as Germany, who recently announced a hike in their defence budget, following Russia’s invasion of Ukraine, EURACTIV’s partner EFE reported. [EPA-EFE/Chema Moya]

The government will gradually increase the country’s defence budget, close to 2% of Spain’s GDP, Prime Minister Pedro Sánchez, confirmed on Wednesday, despite criticism from its left-wing coalition partner Unidas Podemos (United We Can).

The Iberian country spends 1.4% of its GDP on defence, but the new target-aligned with NATO’s objectives-would be to reach 2% “in the coming years”, Sánchez said in a television interview aired this week, without giving a definite date.

Sánchez reiterated his commitment to following other NATO members, such as Germany, who recently announced a hike in their defence budget, following Russia’s invasion of Ukraine, EURACTIV’s partner EFE reported.

If other EU members show solidarity with Ukraine and have expressed their will to contribute more to a common European Defence policy, Spain has to join the effort, the PM said.

A few members of Unidas Podemos, including Labour Minister Yolanda Díaz, have expressed their opposition to the increase.

However, Sánchez on Wednesday appealed to the “European patriotism” of Unidas Podemos. The invasion of Ukraine and the risk of a potential Russian attack on NATO members show the urgent need for Europe to strengthen its security, he stated.

“Strengthening security is something that concerns Europe and each and every one of the member states. Europe is not an entelechy; we are all part of it, and from Spain, we must not only be jointly responsible for Europe’s security but also show solidarity”, Sánchez added.

However, there is no consensus among the Spanish population about the need for the country to participate more actively in NATO operations, according to a recent survey by Real Instituto El Cano.

In a joint press conference in Madrid with Croatia’s Prime Minister Andrej Plenkovic, the Spanish PM recalled that Europe finds itself in a “historic crossroad”, where all EU member states need to be united in defending Europe’s core values.

Sánchez visited Bratislava Wednesday afternoon to mark his tour of eight EU countries with whom he wants to build a broad consensus on the need to reform energy markets and reduce Europe’s dependency on Russian gas and oil, ahead of next week’s crucial European Council in Brussels.

NATO’s next summit will take place in Madrid from 29 to 30 June.