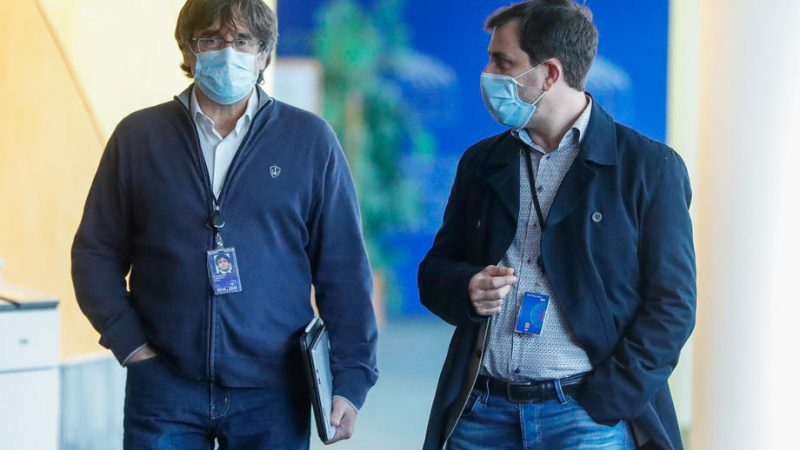 Larena is demanding the “immediate extradition” of Puigdemont to Spain, so he can appear before the Spanish courts to respond to charges related to the 2017 illegal referendum. [EPA-EFE/ STEPHANIE LECOCQ]

Pablo Llarena, the judge in charge of the “procés case” which relates to an allegedly unlawful referendum held in Catalonia in 2017- sent on Thursday a letter to the Sassari court of appeal warning the Italian judiciary that the European Arrest Warrant (EAW) against Catalonia’s former president Carles Puigdemont is still in force.

Larena is demanding the “immediate extradition” of Puigdemont to Spain to appear before the Spanish courts to respond to charges related to the 2017 illegal referendum.

The judge requested after learning that – according to some sources quoted by Spanish media on Thursday – the EAW is not in force in the “Puigdemont case”.

In an official letter sent to the representative of Spain at Eurojust – forwarded to the Italian judge in Sassari – Llarena explains that all the steps taken since the first EAW was issued against Puigdemont on 14 October 2019 are valid and that the warrant against the Catalan politician is active.

Llarena’s main objective is to keep alive the preliminary steps of the extradition process that began last Friday, after the arrest of Puigdemont in Sardinia, El País reported.

In the letter, Larena expresses his concerns about “(…) certain information that denies that the European Arrest Warrant against Carles Puigdemont i Casamajó may be in force”.

Llarena rejects the legal argument maintained by the Spanish State Attorney’s Office in its information to the General Court of the European Union. This led the EU court to lift the immunity of the Catalan former president on 30 July. The presentation of a preliminary ruling before the EU Court of Justice does not suspend the EAW against Puigddemont, Llarena added.