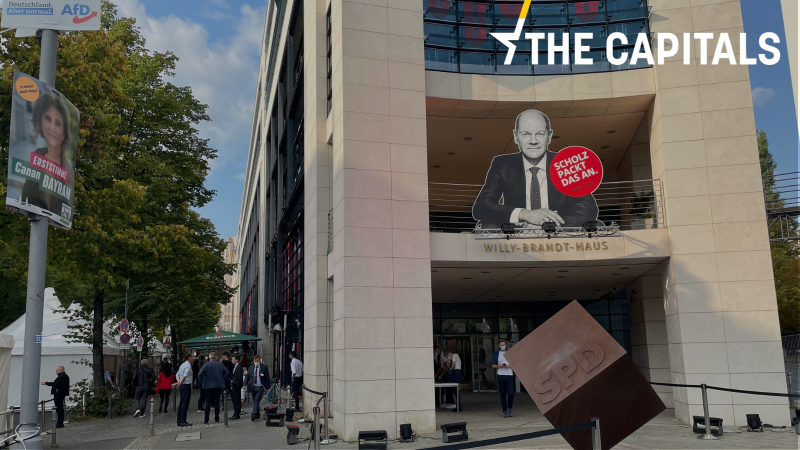 "If Die Linke is out of the parliament, Scholz will have every right to think of FDP or even another grand coalition with the conservatives with him as a chancellor,” an SPD source told EURACTIV. [Photo by Sarantis Michalopoulos | EURACTIV.com]

For the first time in almost 20 years, the SPD has secured the top spot in the elections. However, with a left-wing alliance falling short of a majority, the party is faced with severely limited coalition options and intra-party divisions.

“The citizens have made their cross for the SPD in order to have a change in government,” the social democrat’s lead candidate Olaf Scholz said.

However, as a so-called “red-red-green” coalition between SPD, the Greens, and far-left Die Linke did not reach a majority in parliament, the social democrats find themselves without an option for a left-wing coalition.

Instead, the party is left with two choices: a “traffic light” coalition with the Greens and the liberal FDP, who are likely to be courted by the conservatives as potential partners.

Or a revamp of the current ruling “grand coalition” with the CDU/CSU with the twist that, this time, the SPD rather than the conservatives would take the chancellery and the leading role.

In the weeks leading up to the election, Scholz distanced himself from the conservatives. “I think that, after 16 years, many voters would like for the CDU to finally go into opposition again,” he had said in the final TV debate.

On the election night, though, Scholz shied away from making any such comments about the conservatives.

“If Die Linke is out of the parliament, Scholz will have every right to think of FDP or even another grand coalition with the conservatives with him as a chancellor,” an SPD source told EURACTIV.

The party base also seems to have much stronger feelings on the issue. At the SPD election event in Berlin, the crowd booed at the announcement that a grand coalition would be mathematically possible.

Will SPD members have a say?

Whether the base will get a say in matters depends on whether the party leadership will call a membership vote on a potential coalition agreement. However, this in itself is also a question that divides the party’s leadership.

On Thursday (23 September), SPD vice-chairman Kevin Kühnert told German newspaper Rheinische Post that the party should have its members’ consent to any coalition agreement, arguing that the SPD was a “participatory party”.

On the other hand, Scholz appeared much more reluctant when he was asked about the issue two days later at a campaign event. “This is something that we will decide once we get to that point,” he said.

Based on past elections, the question of “vote or no vote” could yet prove a thorny one within the party. In 2013, for instance, then-party leader Sigmar Gabriel had pushed through a membership vote against significant intra-party resistance.

The split on preferred coalition options between lead candidate Scholz, who belongs to the SPD’s more conservative wing, and the more left-leaning party base had already been a topic of discussion throughout the last weeks of the election campaign.

The conservatives and liberals had repeatedly stressed that, even though Scholz had distanced himself from Die Linke, the party base would have a much larger appetite for a coalition with the far left.

Indeed, the crowd at the party headquarters cheered at the release of any poll data projecting that Die Linke would pass the 5% hurdle to make it into parliament.

Now that a left-wing alliance is out of the picture, the base’s preference is less clear-cut, but it is likely that members will have little appetite for a coalition involving the conservatives.

Following the previous election, the return to a grand coalition had been a highly politicised issue within the party, even though the base eventually voted in favour of it.

What seems relatively certain is that, if a vote does end up being called, members would be consulted on a final coalition agreement, rather than before starting exploratory or coalition talks. This means that the base would not decide on which coalition option they prefer, but rather for or against a specific one.

Notwithstanding potential complications, Scholz said in a TV panel on Sunday evening that he was aiming to conclude coalition negotiations by Christmas at the latest. By comparison, after the previous elections in September of 2017, a coalition agreement had only been signed the following March.