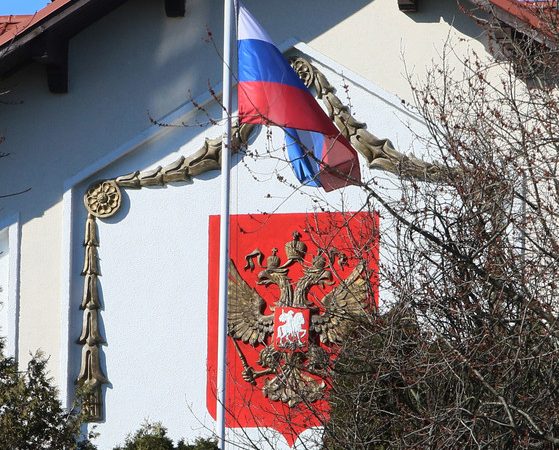 An exterior view on the Russian Embassy in Vilnius, Lithuania. [EPA-EFE/VALDA KALNINA]

The street where the Russian embassy is located in Vilnius will be renamed Ukraine’s Heroes street, the city’s mayor, Remigijus Šimašius, announced on Thursday.

A small cul de sac in Lithuania’s capital Vilnius did not have a name, and the only address in this street belonged to the Russian embassy. Once formalities are finished, the embassy’s new address will be “Ukraine’s Heroes 2”, in Ukrainian – “Улица Героев Украины 2”.

“Every Russian embassy’s workers’ business card from now on will have to honour Ukrainian heroes,” the city mayor wrote in his Facebook post.

“Everyone who writes a letter to the embassy will have to think about Russia’s aggression and Ukrainian heroes,” Šimašius added.

Earlier this week, Šimašius sprayed “Putin, the Hague is waiting for you” on a road close to the Russian embassy, referring to the International Criminal Court in the Hague. On Wednesday, the court said that it would start investigating Russia’s war crimes in Ukraine.