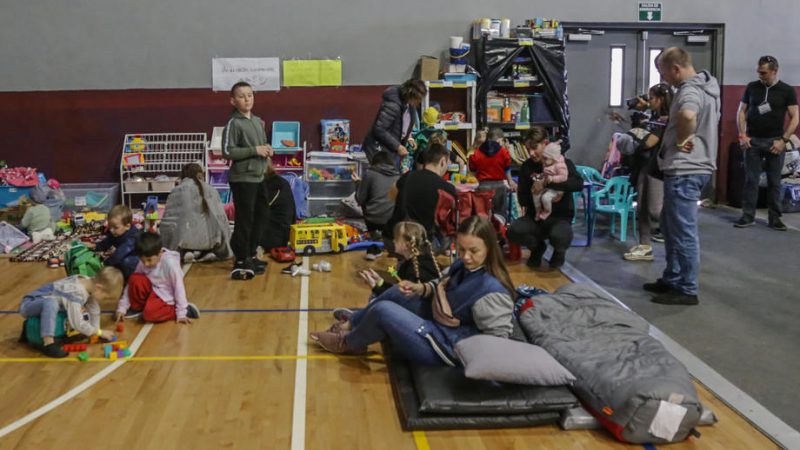 The announcement comes as Ireland struggles to find housing for the 25,000 refugees who have arrived since the war broke out on 24 February. [EPA-EFE/Joebeth Terriquez]

Dublin will establish a new subcommittee to oversee the government’s response to the war in Ukraine, modelled on the body launched to manage the COVID-19 crisis.

The committee will be made up of senior officials, including the Taoiseach Micheál Martin, Deputy Prime Minister Leo Varadkar, and other cabinet ministers. It will reportedly address issues including providing accommodation and education for those arriving and potential payments for those hosting refugees in their homes.

The announcement comes as Ireland struggles to find housing for the 25,000 refugees who have arrived since the war broke out on 24 February.

Public Expenditure Minister Michael McGrath told broadcaster RTÉ on Tuesday that “the system is now under real strain, and we are at a point where we are offering accommodation that is not of a standard we would like.”

McGrath said that the government has made provisions for €3 billion worth of spending to address the crisis, adding that this number was speculative and dependent on the number of refugees who would end up in Ireland.

Earlier this week, Martin echoed a pledge made by Justice Minister Helen McEntee that Ireland would not put a cap on the number of refugee arrivals, saying, “we are part of a European-wide response, and first and foremost, we are not a military power, the thing we can do best is humanitarian”.

He also rejected the idea that the country’s response to the crisis should be centrally managed, saying instead that “every government department, every government agency has to be involved.”

Government leaders met this week to review a plan by the Housing Ministry to fast-track the vetting and refurbishment of large vacant properties that could be used as accommodation for refugees. An existing programme allowing empty social homes to be acquired and repurposed by local authorities has also been expanded.

Also under consideration by the government is a payment scheme which would see funds of up to €400 a month to support households that take in refugees.