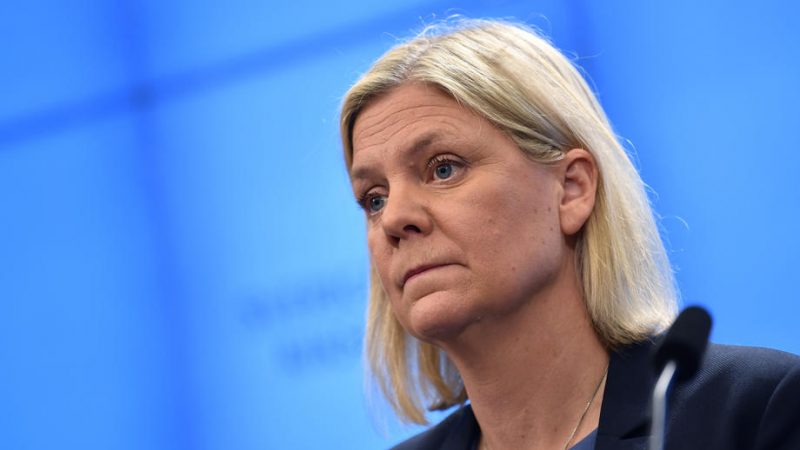 “In today’s Europe, there is no room for such a thing,” she said, stressing again that “Russia’s armed aggression is unprovoked, indefensible and illegal.” In her view, it is an attack on every country’s right to self-determination. [EPA-EFE]

The newly elected Chair of the Social Democratic Party, Magdalena Andersson, became Sweden’s first female Prime Minister on Wednesday, only to resign just hours after she was appointed.

Her confirmation as Prime Minister was sealed with the tightest of margins. According to the Swedish constitution, what counts is the number of no votes. Of the 349-seat parliament, she received 174 votes against, one short of rejection. Ms Andersson won the nomination with the votes cast by the Centre Party and the Left Party.

A deal struck after negotiations between the government parties of the Social Democrats and the Greens, and the Left Party was crucial. The “structural reform” meant that pensioners with low income, around 700,000 people, were to get roughly a €100 raise for their monthly pensions starting from the beginning of 2023.

Interviewed by SVT, party leaders praised the fact that the country had a first female PM.

In the afternoon, the parliament rejected the government’s planned budget and instead approved the shadow budget. Andersson said she would still be ready to govern.

Following the government’s defeat, the Greens, having doubts over their position in the government, decided to abandon their ministerial posts. In front of the cameras, the party leadership justified their withdrawal by saying they could not support a budget carrying a fingerprint from “an extreme right-wing party”, the Sweden Democrats.

Following the Greens’ decision, Andersson resigned after being prime minister for seven hours. However, she informed the Parliament Speaker of her willingness to try and form a new, solely Social Democratic government. After a chaotic day, that is the most likely outcome, and  Andersson could yet have a second chance.