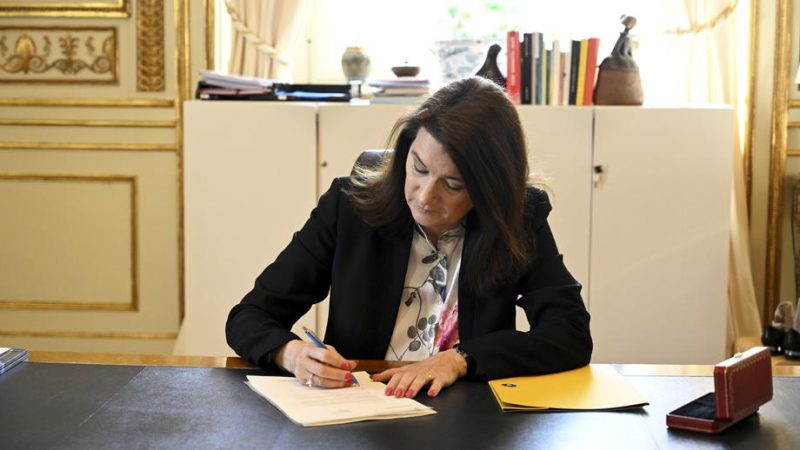 In a historical moment, Linde signed her country’s application to NATO on Tuesday (17 May) after she was given the go-ahead from Social Democrat Prime Minister Magdalena Andersson on Monday (16 May).  [EPA-EFE/Henrik Montgomery]

Foreign Minister Ann Linde signed Sweden’s NATO application after her government decided to apply for membership following a parliamentary debate during which almost all parties appeared to be on board.

In a historical moment, Linde signed her country’s application to NATO on Tuesday (17 May) after she was given the go-ahead from Social Democrat Prime Minister Magdalena Andersson on Monday (16 May).

“It feels big, serious and as if we have agreed on what we believe is best for Sweden,” Linde told national broadcaster SVT.

The Swedish application will be submitted together with Finland’s to NATO Secretary-General Jens Stoltenberg on Wednesday (18 May) as was announced by Andersson and Finnish President Sauli Niinistö during a joint press conference on Tuesday (17 May).

Sweden’s decision to apply to NATO was announced after a parliamentary debate in which Andersson said a broad majority favours joining the Alliance. “The best thing for Sweden and the Swedish population is to join NATO,” she said, warning that Sweden would be “in a vulnerable position” while the application was being processed but that she felt “confident that there is support for this among the Swedish people.”

In the Swedish Riksdag, the ruling Social Democrats, as well as the right-wing opposition, agreed on the premises of a NATO application. Right-wing Moderates, Christian Democrats, Centrists and Liberals, have been pushing for Swedish membership of NATO for several years and even the far-right Democrats of Sweden declared to be in favour.

However, the Left Party and the Greens oppose membership. The negative effects of NATO membership still outweigh the benefits, said Greens’ spokesman Per Bolund during a special party leaders’ debate.

“A world with nuclear weapons can never be a safe world,” said Bolund.

On her part, Left Party leader Nooshi Dadgostar said that the fact that the government will take this decision without a referendum or a vote will “undermine the legitimacy of the decision,” which she sees as a “betrayal of the voters.”

“A decision is now being made that will affect generations of Swedes, without the Swedish people having had a say in the process. I regret that,” she concluded..