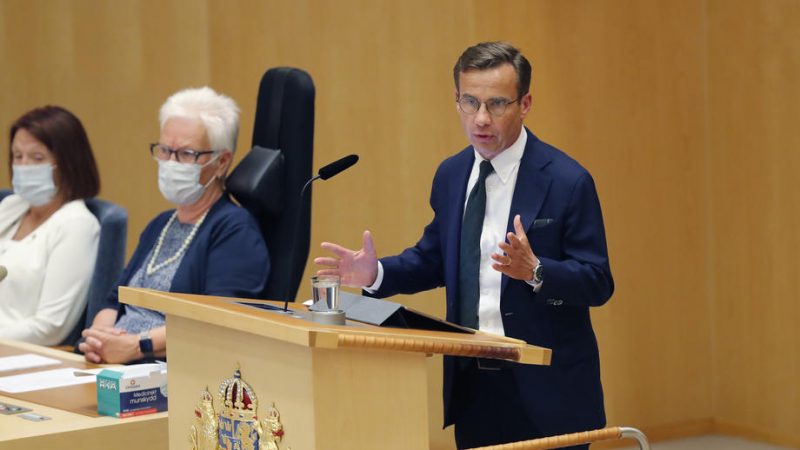 “Those who live in gang-criminal environments are a threat to Swedish security. It is not a right to be in Sweden in general if you are not a Swedish citizen,” said Ulf Kristersson during his interview. [EPA-EFE/Christine Olsson]

Even if they have not committed a crime, foreign nationals linked to gang crime must be deported, Ulf Kristersson, leader of the right-wing party, the Moderates, told the SVT Morgonstudion on Thursday.

To tackle serious crime, the Moderates want to be able to deport foreign citizens who have a connection to criminal gangs before they have committed a crime in Sweden.

“Those who live in gang-criminal environments are a threat to Swedish security. It is not a right to be in Sweden in general if you are not a Swedish citizen,” said Ulf Kristersson during his interview.

According to Kristersson, deporting gang-related criminals is based on the same principle as the expulsion of known terrorists that have not yet acted.

“That’s why we have intelligence gathering in Sweden. We check whether people are terrorists or are in crime-prone environments. It is clear that we cannot accept that people come here to be in a gang-criminal environment,” Kristersson said.

On the other hand, the Moderates do not support the far-right Sweden Democrats’ proposal that entire families’ residence permits should be withdrawn if one of its members commits a crime.

“I think that a punishment is individual. You are punished personally when you commit a crime.  But punishment is not carried by generations or by unrelated family members,” he said.

“I share that frustration, but perhaps it could have been expressed in other ways,” said Kristersson.

The Moderates are the biggest right-wing opposition party in the Swedish Riksdag, with 70 MPs out of 349. In comparison, the ruling Social Democrats have 100 MPs.

Therefore, the Moderates will have to reckon with the far-right Democrats of Sweden and their 62 MPs as their Liberal allies have lost ground in the recent polls.