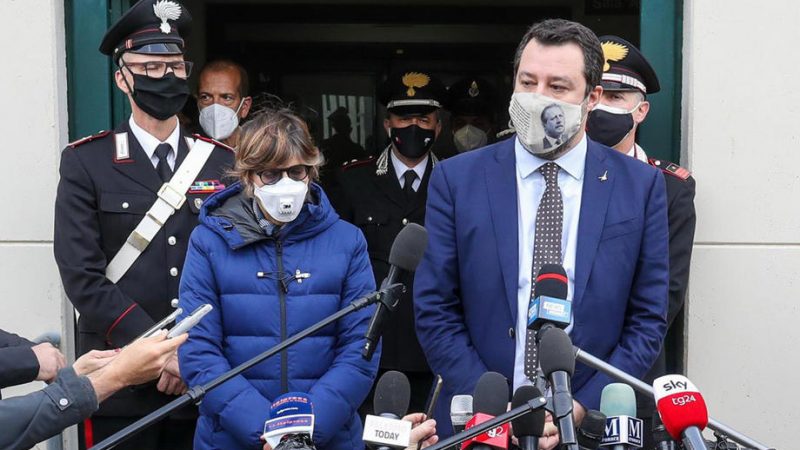 Right-wing leader Matteo Salvini of the Northern League has said he wants to bring to the attention of the government, which he supports, “the models of other European countries.” [EPA-EFE/IGOR PETYX]

The arrival of some 2,148 migrants between Sunday and Monday at the Italian island of Lampedusa, as well as the interception by the Libyan coast guard of 700 migrants and the death of five due to a boat capsizing, has caused sharp controversy in Italy.

Right-wing leader Matteo Salvini of the Northern League has said he wants to bring to the attention of the government, which he supports, “the models of other European countries.”

“We will ask that Italy behave as Spain, Greece and France. In no other country are there the numbers, dimensions and problems we have in Italy. We cannot go on like this”, Salvini said.

According to the newspaper La Repubblica, Prime Minister Mario Draghi said he intends to propose to EU partners that the so-called Malta agreement on migration, signed in 2019 but never entered into force, be restored. The agreement is based on a voluntary relocation mechanism with the EU Commission acting as mediator.

However, finding an agreement at EU level before the German elections set for September would be difficult, the newspaper writes.

This is evidenced by the current stalemate on a new migration and asylum agreement despite EU Home Affairs Commissioner Ylva Johansson having said that “it is time for Europe to show solidarity with Italy”.

Meanwhile, Rome is preparing to welcome tourists for the summer and for foreseeable news tensions in the majority that supports the government. (Daniele Lettig | EURACTIV.it)