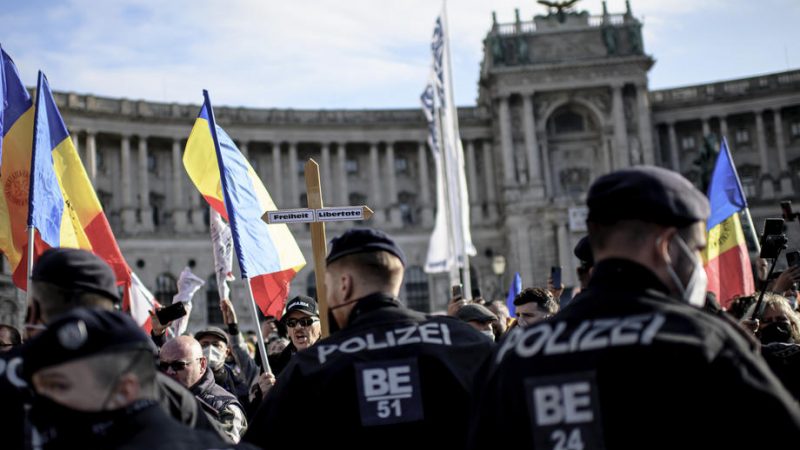 Around 40,000 people poured onto the streets of Vienna to protest against the total lockdown. [EPA-EFE / CHRISTIAN BRUNA]

Around 40,000 people poured onto the streets of Vienna to protest against the total lockdown that is to be introduced from Monday, as well as the new measures that will make vaccines mandatory from February 2022.

On Friday, the Austrian government announced a lockdown for all starting Monday. Previous lockdown measures targeting the unvaccinated have proved unsuccessful, as infection rates continue to increase and intensive care units are reaching their maximum capacity.

Furthermore, the government announced that vaccination would become mandatory to prevent the health crisis from spiralling out of control.

The move sparked much controversy, with Herbert Kickl, leader of the right-wing FPÖ, warning of a coming “dictatorship” and calling on Austrians to take the matter to the street.

On Saturday, around 40,000 people followed his call and demonstrated against the measures, spearheaded by far-right activists and anti-vaxxer conspiracy theorists.

Kickl also made an appearance.

“The government has to accept that the overwhelming majority of the population is completely healthy,” he claimed in an online broadcast at the demonstration.

The police reported 400 criminal offences. Interior minister Karl Nehammer warned of the “radical atmosphere” at the protests, underpinned by far-right and antisemitic sentiments. Numerous demonstrators had worn the yellow star – the identity mark of the Jews during the NS-era – claiming that they are the “new Jews” and that the measures would equal a “genocide”.

President Alexander Van der Bellen, meanwhile, warned that the new measures could deepen divides in society. “There is a great danger that the rifts are getting deeper,“ he said during a television address.