Thousands of migrants gather at the closed border crossing in Kuźnica 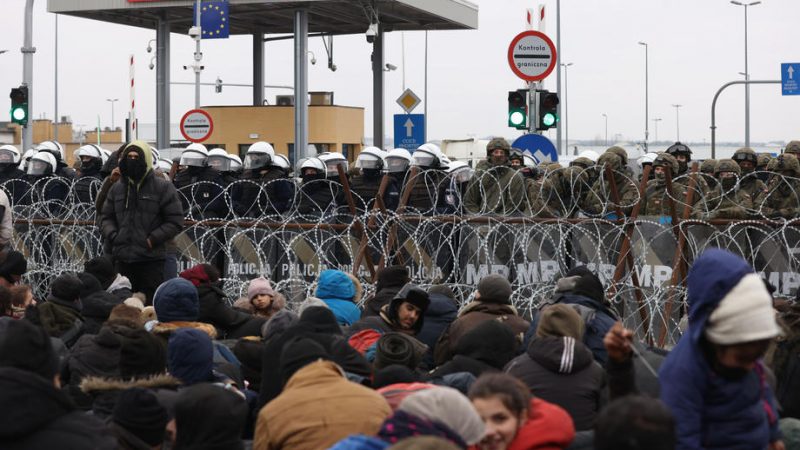 Early Monday morning, a large crowd of migrants emerged at the same border crossing where one week before. [EPA-EFE / OKSANA MANCHUK/BELTA HANDOUT]

Early Monday (15 November) morning, a large crowd of migrants emerged at the same border crossing where one week before, there were attempts to break through the Polish border.

“We expect the border to be forced today”, warned Anna Michalska, spokeswoman of the Polish Border Guards. By the afternoon, she said the situation was under control however hundreds of people created a camp and started fires.

In Starzyna, south of Kuźnica, a smaller crowd of migrants attacked Polish security officers with stones.

Stanisław Żaryn, a spokesperson of the special services minister, said on Twitter that “Belarussians purposely escalated the situation at the border” by directing the migrants to the closed border crossing in Kuźnica.

He has warned that the gathering resulted from ‘rumours’ the Polish side would open the border to allow for a convoy of migrants to cross the country into Germany. Polish officials say that this was misinformation and CNN confirmed the ‘rumours’ were present among the migrants on the Belarussian side.

Meanwhile, a new Polish coalition of NGOs ‘Grupa Granica’ (the Border Group) shared a video claiming that Kurdish migrants in Belarus are protesting against forcing them to attack border facilities.

Grupa Granica says the Belarussians are forcing the migrants to be violent. “The migrants want to avoid power confrontation”, said the activists quoted by Gazeta Wyborcza.

The lack of verifiable information on the Polish side of the border, which has banned journalists since September, has been counteracted with recent reports on CNN and the BBC from the Belarussian side.

This may soon end as the ruling Law and Justice party considers lifting the media ban in Poland.