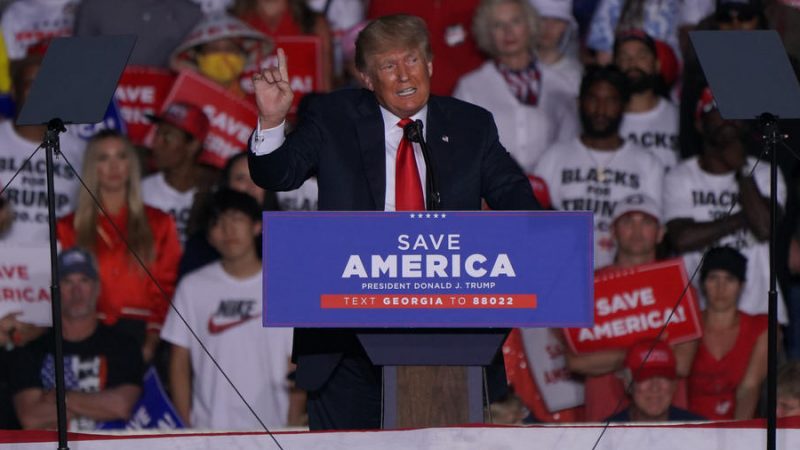 The agreements my administration brokered are historic and should not be abandoned, many lives are at stake,” former US President Donald Trump said in a statement. [EPA-EFE / ELIJAH NOUVELAGE]

“The great people of Serbia and Kosovo have overcome tremendous obstacles in their pursuit of economic normalisation. The agreements my administration brokered (in Washington, on 4 September, 2020) are historic and should not be abandoned, many lives are at stake,” former US President Donald Trump said in a statement.

“Today, my envoy Ambassador Ric Grenell visited the Kosovo-Serbia border to highlight this important agreement. Just like we proved in the Middle East with the Abraham Accords, peace and economic normalisation is possible, but it takes a sincere effort and unwavering leadership. Peace is possible, don’t give up – long term prosperity for those two nations is at stake!” the statement also read.

Richard Grenell is a former US ambassador to Germany, special envoy to the region, and staunch Trump partisan. He is disliked in Kosovo due to the belief he was involved in bringing down the first Kurti government and apparent loyalty to Serbia. Earlier this week, political analyst Dusan Janjic said the Serbian state was paying Grenell “$100,000 a month for lobbying”, something Grenell and the Serbian government has denied.

At the same time, the President of Kosovo Vjosa Osmani met with US Undersecretary of State Victoria Nuland during her visit to Washington. The meeting reaffirmed the two countries’ continued commitment to this strong partnership, as well as their unwavering commitment to common values, the president’s office reported.

Nuland stressed that the new administration is committed to peace, stability, and development in Kosovo and the entire region and to supporting the dialogue process between Kosovo and Serbia.