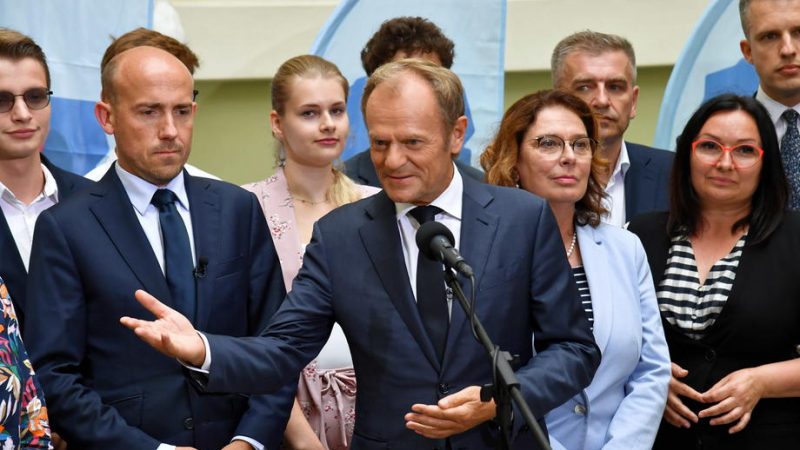 In the middle of a national debate about leaving the EU – also known as ‘Polexit’ – the European Council’s former president Donald Tusk offered his biggest opponent, the ruling Law and Justice (PiS), a hand in changing the nation’s Constitution to ensure such a move was not possible without a two-thirds majority in parliament.

Poland’s biggest opposition party, the Civic Platform (PO, EPP), held its rally in Płońsk, a town of 20,000 people northwest of Warsaw as part of the PO’s new strategy to speak to citizens in smaller towns and in the countryside.

“We need to reach the people. We are able to open people’s eyes to what is happening to our country. I think the way Tusk speaks about Christianity and patriotism is appealing to the average voter”, she added. Earlier, Tusk appealed to his fellow party members to be respectful of the state institutions and the Church while being critical of individuals who corrupt or mismanage them.

Asked by EURACTIV to comment on the rally, the head of the Polish EPP national delegation, Andrzej Halicki, underlined the focus of his party on the dynamic growth and the “secure” Poland, which also includes health, energy and EU membership.

“Either we are able to guarantee safety, or we will give Poland into the hands of people who want to destroy safety”, Halicki said.

It is a common worry that Polexit could easily happen.

Currently, the Constitution talks only about the rules of adhering to international organisations, not about the rules to leave them. This is why a simple act of parliament and a presidential signature could suffice.

PiS’ initial reaction to PO’s offer was positive. Prime Minister Mateusz Morawiecki said: “We do not say ‘no’. In fact, this is quite possible”.

Speaking on condition of anonymity, a senior PO politician commented: “If I were Jarosław Kaczyński [PiS leader], I would take it. But I am unsure he could be rationed with”.