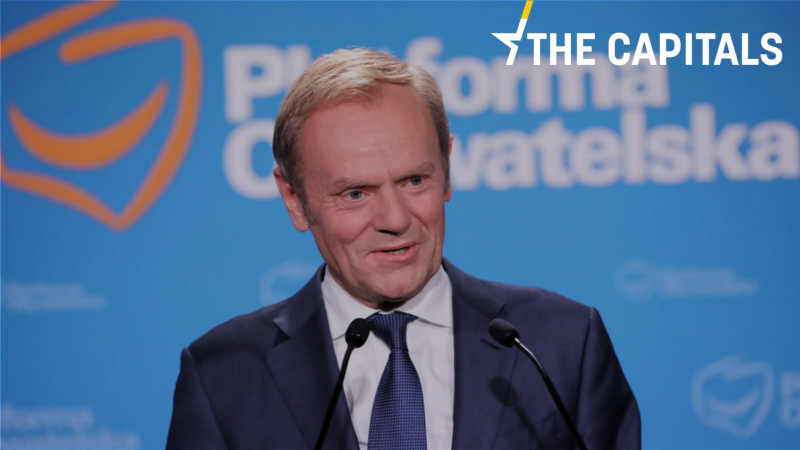 Poland's ruling United Right (Zjednoczona Prawica; ZP), of which PiS is the largest grouping, is still leading in the polls, but in recent weeks disputes have emerged among the coalition partners. Three lawmakers left the PiS parliamentary group last week. [EPA-EFE/Wojciech Olkusnik]

“The political reason for my return is the belief that the PO is essential, it is needed as a force, not as a memory – to win the fight for the future against PiS [Law and Justice Party]”, Donald Tusk said on Saturday.

After he left Polish politics he became president of the European Council before becoming head of the centre-right European People’s Party (EPP). Tusk said he is returning to Polish politics to help fight the “evil” of the current right-wing movement.

Jarosław Kaczyński, the leader of the ruling Law and Justice party, was among a number of far-right parties from 16 EU countries which signed a document last week calling for deep reform of the EU, because in their words, “instead of protecting Europe  and  its  heritage,  it  is  itself  becoming  a  source  of  problems  and anxiety”.

“President Kaczyński and PiS comrades today should apologise. PiS implements Russia’s agenda 100% of the time. I get furious when I hear about what they do because the evil that PiS does is so evident, shameless and permanent”, he added.

Tusk said Kaczynski’s “new friends” have one thing in common: “Putin’s Russia is closer to their hearts than the European Union”.

“Really the only person who, after something like this, opens another champagne after PiS’s decisions is Putin in the Kremlin,” Tusk said.

Tusk’s return to domestic politics had been under discussion since he stepped down as head of the European Council in 2019. However, the former PM decided not to run in the 2020 presidential election.

Poland’s ruling United Right (Zjednoczona Prawica; ZP), of which PiS is the largest grouping, is still leading in the polls, but in recent weeks disputes have emerged among the coalition partners. Three lawmakers left the PiS parliamentary group last week.

A remedy for the ruling party’s problems was to be the party congress, organised on Saturday, at which Kaczyński was once again elected head of the party.

According to Warsaw University sociologist Jacek Raciborski, PiS’s troubles is the main reason for Tusk’s return to domestic politics. “The erosion of PiS is visible to the naked eye. This is one of the reasons why Tusk decided to come back,” Raciborski told EURACTIV’s partner Gazeta Wyborcza.

An SW Research survey for the rp.pl website found that 49.7% of Poles believe that Tusk will not become prime minister again, with more than 23% holding the opposing view and 27% not having an opinion on the matter.

Tusk: Stepping down as EPP head?

Speaking at a press conference on Sunday, Tusk said he was planning to go on a tour of the country as early as Monday.

Regarding his future as an EPP chief, he said he intends to complete his term but will then hand over power. He said that talks concerning his successor as EPP president would start in the autumn.

“Of course formally I can be the head of the party […] and the European People’s Party, which unites many European parties,” Tusk told reporters.

“But as I said, my intention is to get involved 100%, not 90% or 80%, in Polish affairs, so I have already informed my partners, prime ministers and presidents from the European People’s Party […] that I made a decision to return to Polish politics,” he said.