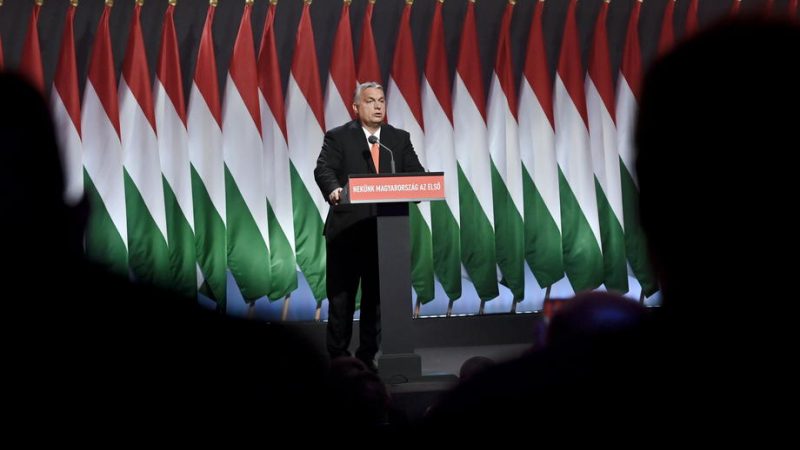 At the 29th Fidesz Congress on Sunday, PM Viktor Orbán was confirmed as leader of the governing party for another two years. [EPA-EFE/Szilard Koszticsak]

At the 29th Fidesz Congress on Sunday, PM Viktor Orbán was confirmed as leader of the governing party for another two years, Telex reported, promising that the last three decades were just a “warm-up”.

Orbán received 1,061 votes from an undisclosed number of votes after being the only nominated candidate for the president’s post, which he has accepted in advance of the results.

“I’m at the best age – although I’m a bit suspicious that I’ve always felt that way”, Orbán said jokingly during his speech.

The past 33 years have been “just a warm-up” and if Fidesz continues to govern, Orbán believes Hungary could be among the most developed countries in ten years.

“We can step up to the ranks of developed countries. We can eradicate the remnants of poverty. We can be a country of green, healthy people, preserving its natural treasures and beauty, living healthier and longer”, he said.

At the day-long event, Fidesz delegates spoke mostly about Brussels, migration and the opposition.

After family minister Katalin Novák resigned as vice-president because of her ministerial promotion in 2020, MEP Kinga Gál was elected to replace her.

The other vice-presidents, Lajos Kósa, Gábor Kubatov and Szilárd Németh were given the vote of confidence to continue.

According to MEP Gál, now an independent European lawmaker after Fidesz left the European People’s party earlier this year, the EU is undermining the nation, religion and the family.