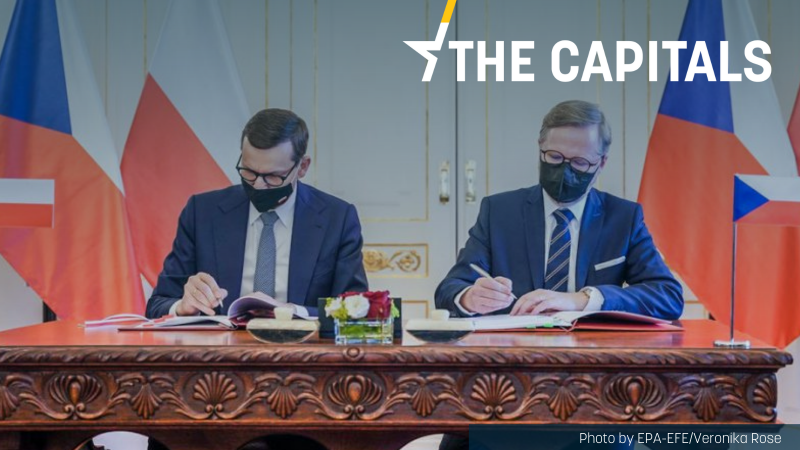 A handout photo made available by the Czech government shows Czech Prime Minister Petr Fiala (R) with his Polish counterpart Mateusz Morawiecki during their meeting at Kramar Villa in Prague, Czech Republic, 03 February 2022.

After Polish Prime Minister Mateusz Morawiecki unexpectedly arrived in Prague to sign a deal on the Turów coal mine on Thursday, the Czech government praised the long-awaited agreement but law experts and green NGOs warn against a bad deal.

The Polish open-pit mine located close to Czech borders was a thorn in the side of Czech-Polish relations due to the impact of mining on Czech villages.

“The Czech government hastily and secretly approved a raw deal because it apparently has no time to comply with the law,” said local activist Milan Starec whose village is directly impacted by mining in Turów. However, Czech law experts see the agreement as illegal as it does not reflect EU law on environmental protection.

Poland agreed with compensation payments and coverage of the expenditures linked to constructing the new underground barrier that should protect Czech villages against water drains. However, the Czech Geological Survey said that the planned wall would have no positive effect on groundwater levels.

According to leaked documents published by Frank Bold lawyers group, PGE, the Polish state-owned company operating the coal mine, confirmed the inefficiency of this measure.

Despite the criticism, governments of both countries are presenting the deal as a great success.

“I think this is a great success, we have managed to roll away the boulder that has been weighing down Czech-Polish relations for the last few years,” Czech Prime Minister Petr Fiala said on Thursday after he signed the controversial deal.

“The period of frozen Polish-Czech relations ends. Today we are opening a new chapter. Again we look in the future with optimism. This is what we need as neighbours,” said Morawiecki, who travelled from Prague directly to Turów to present the deal to local miners.

The very same day the deal was signed, the EU’s Court advocate general said that Poland infringed EU law by extending the licence for its Turów coal mine without carrying out an environmental impact assessment. In September 2021, the EU Court issued a preliminary measure, ordering Poland to pay a €500,000 daily fine for mining.

So far, Poland has failed to follow the order and pay the penalty.

“I will talk with many other European prime ministers and I will ask them: ‘Dear colleague from this or that country, if you were asked by an EU Court judge to close a mine and a power plant that serve several million people or respond for 4, 5, or 6 per cent of the electricity system, would you agree with such a decision?” Morawiecki said.

“You cannot expect Polish people to be left with no water nor heating nor electricity” because of an “unreasonable” decision by “one judge in Luxembourg,” he added.