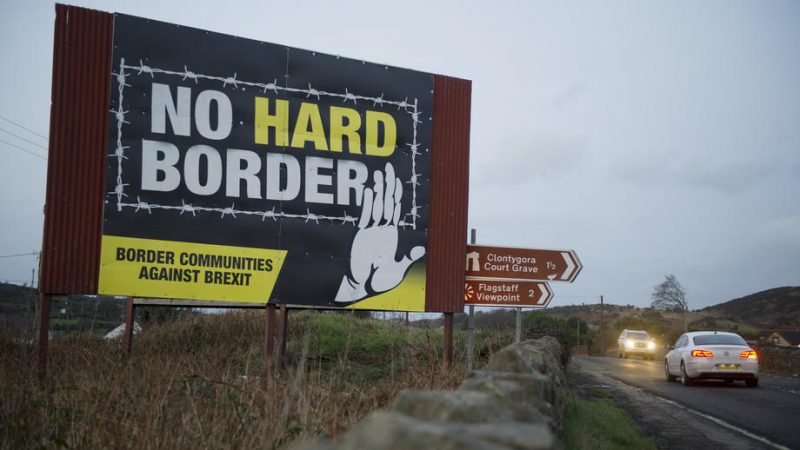 A 'no hard border' poster is pictured on the Irish border in Newry in Northern Ireland. [EPA-EFE/AIDAN CRAWLEY]

The Democratic Unionist Party has set its own 21 February deadline for the EU and UK government to resolve the long-running dispute over the Northern Ireland Brexit protocol.

Following a meeting with Foreign Secretary Liz Truss on Thursday, Paul Givan, the DUP’s First Minister in the Northern Ireland devolved executive, said that he expected the UK to take unilateral action to stop customs checks on goods travelling from Britain to Northern Ireland if the impasse is not broken.

Givan said that he had “emphasised the absolute critical nature of that progress being made, because the protocol is causing instability to these institutions, it is damaging our economy,  and this is having a real impact on Northern Ireland.”

The pro–British DUP, which opposes the protocol, has threatened to halt checks on goods at Northern Ireland’s ports, a move that governing partner Sinn Fein, which supports a united Ireland, has dismissed as ‘a political stunt’.

EU and UK officials have set their own end February deadline to reach a compromise, with both mindful that Northern Ireland assembly elections will be held in May, with campaigns starting in March.

Current opinion polls suggest that Sinn Fein will emerge as the largest party in the devolved government for the first time.

Truss and European Commission vice-president, Maroš Šefčovič, said earlier this week that they believed an agreement could be reached in February.