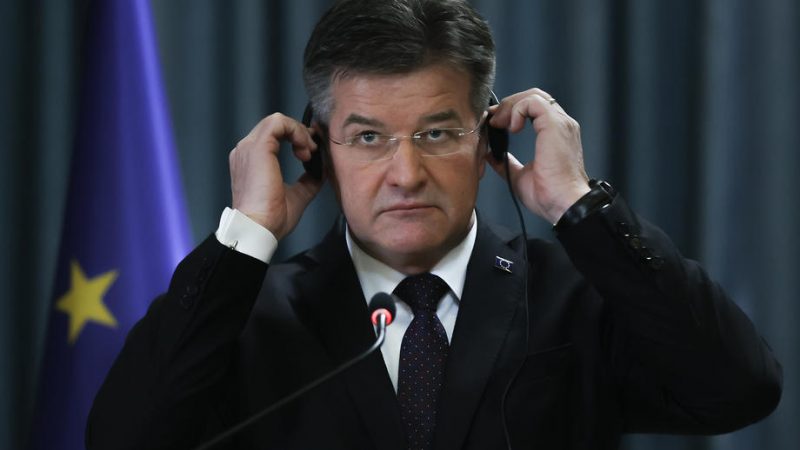 Lajčak added that several concrete proposals had been discussed, but that the only definite takeaway had been that Vučić and Kurti agreed to resume talks in September. [EPA-EFE/VALDRIN XHEMAJ]

The leaders of Serbia and Kosovo on Monday blamed each other for little progress at EU-mediated talks in Brussels aimed at resolving one of Europe’s thorniest territorial disputes.

Miroslav Lajčak, the EU special representative to the Belgrade-Pristina dialogue, said that he had met with Kosovo’s Albin Kurti and Serbia’s Aleksandar Vučić, and that “very little progress” had been made.

“The meeting was difficult and highlighted the two sides’ very different approaches to the normalisation of relations between Kosovo and Serbia. Consequently, only slight progress was made today,” Lajčak said after the meeting.

He added that several concrete proposals had been discussed, but that the only definite takeaway had been that Vučić and Kurti agreed to resume talks in September.

“What’s important for the EU is to stress that a European future for Serbia and Kosovo depends on normalisation of relations, which is why the EU expects both sides to work together, to overcome the past and resolve current issues,” Lajčak said.

Vučić told reporters that Kurti had accepted none of the three points in the EU proposal.

“Serbia fully accepted all three points: to step up joint efforts to identify the remains of missing persons, to refrain from actions that may destabilise the situation on the ground and to hold monthly meetings among the main negotiators to prepare for high-level meetings,” Vučić said.

He said the “ethnic Albanians didn’t want to accept any point” and that he was “particularly concerned” that they “avoided pledging to refrain from actions that could destabilise the situation on the ground.”

“We offered a six-article Declaration of Peace, balanced and in English, which speaks of the commitment not to attack each other and the reciprocity of rights,” said Kurti, adding that his delegation “had also provided evidence of 11 violations committed by Serbia against Kosovo through barriers against free trade that should be eliminated. Both of these were rejected.”

“It is unfortunate that we failed to come up with at least one joint statement from this meeting. The reason was that the Serbian delegation did not accept the inclusion in the text of the phrase ‘dealing with the past’,” he added.

Kosovo has been so far recognised by more than 100 countries, but Serbia still considers the territory as its southern province, and is supported by Russia and China.