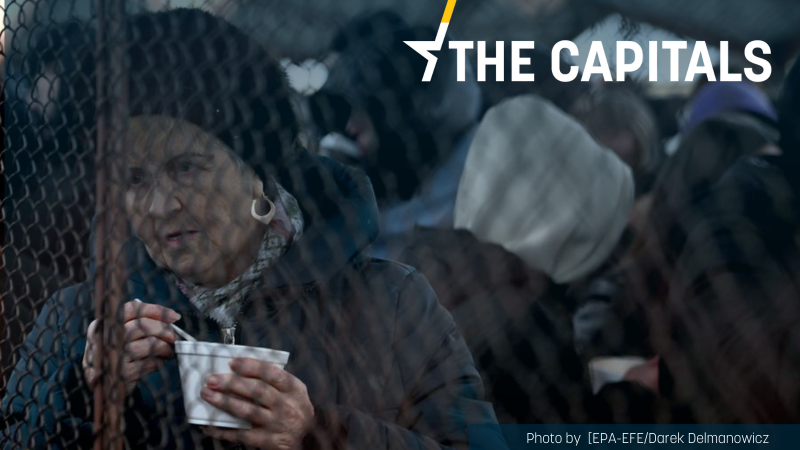 Visegrad countries, known for having a strict immigration policy and a zero refugee relocation approach following the sudden influx of refugees to Europe after the Syrian war, have opened their gates to hundreds of thousands of refugees coming from Ukraine.

According to EU Home Affairs Commissioner Ylva Johansson, EU countries are already hosting over 300,000 Ukrainian refugees. In upcoming days and weeks, this number is expected to reach millions.

For people fleeing from the country, central Europe became a safe harbour. Poland, Slovakia and Hungary have direct borders with Ukraine, and they are offering help to people in need of shelter.

Poland will accept thousands of Ukrainians

“We will accept anyone who needs it. The Ukrainian society gets more afraid and stressed. We are ready to accept tens, hundreds of thousands of Ukrainian refugees,” said Prime Minister Mateusz Morawiecki during an interview for the German press.

The Minister of Health, Adam Niedzielski, announced that refugees are released from quarantine obligation, which would occur after crossing the border. Ukrainian citizens are also allowed to test for COVID-19 and vaccinate for free in Poland.

Ukrainians can also travel by public trains for free for the next four weeks. They are also allowed to bring their pets with them to Poland.

Polish people are organising large charity fundraisers, collecting food, medicines, hygiene products and donating blood. Hundreds of Polish drivers have gathered near the border crossing to help refugees get to the cities for free. People are also ready to host refugees in their homes.

Slovakia also opened its territory for Ukrainian refugees. “Slovakia is ready to help every Ukrainian who asks for such help,” said Slovak Prime Minister Eduard Heger (OĽaNO) after Russian invaded Ukraine on Thursday (24 February). Slovakia has shown unexpected solidarity with Ukrainians fleeing from war, not seen during the migrant crisis in 2015-2016.

By Saturday evening, more than 10.000 crossed the border.

On the borders, several facilities for emergency accommodation are already in place. The Slovak government has set up a temporary emergency camp in Humenné, a small town close to the Ukrainian border. The national parliament repurposed its hotel near the border. Two border regions – Košice and Prešov offered accommodation of their own, including school gyms, hotels and office buildings.

Many people, charities and institutions have sent material help to the borders or travelled there to help on the spot. According to Parliament Speaker Boris Kollár, more efficient coordination of the efforts is needed.

Finance Minister Igor Matovič (OĽaNO) said on Saturday that all Ukrainians would receive asylum and work permits. The government will also financially support all people who grant accommodation to the refugees.

Czechia is currently operating a special train route, picking up Ukrainians at the EU’s external border and taking them to Czech territory. The Interior Minister Vít Rakušan said that there was no ceiling on the number of refugees who could come as the government is ready to help anyone in need.

The minister also announced an aid delivery of 28 tonnes of food to Ukraine’s western region of Transcarpathia, Hungary Today has reported.

Moreover, the country sent 100,000 litres of vehicle fuel to be used for hospitals, ambulances, humanitarian organisations and catastrophe protection agencies.

Szijjártó said 66,000 crossings from Ukraine have been registered since the war broke out on Thursday.

Hungary is a “friendly place” for people fleeing Ukraine, Prime Minister Viktor Orbán said on Saturday, adding that everyone crossing the border from Ukraine is accepted.

“The rule is that all refugees must be assisted,” he told journalists during an inspection of the border with Ukraine in Beregsurány.

“I see there is a Hungarian-Ukrainian friendship among those who live here that is now a tangible advantage to Ukrainians.”

The prime minister also said that while the front line of the conflict remains far from Hungary for the time being, military actions in Transcarpathia must be anticipated.

The coming weeks “will require stronger composure, because we don’t want to become involved in this armed conflict,” he said.