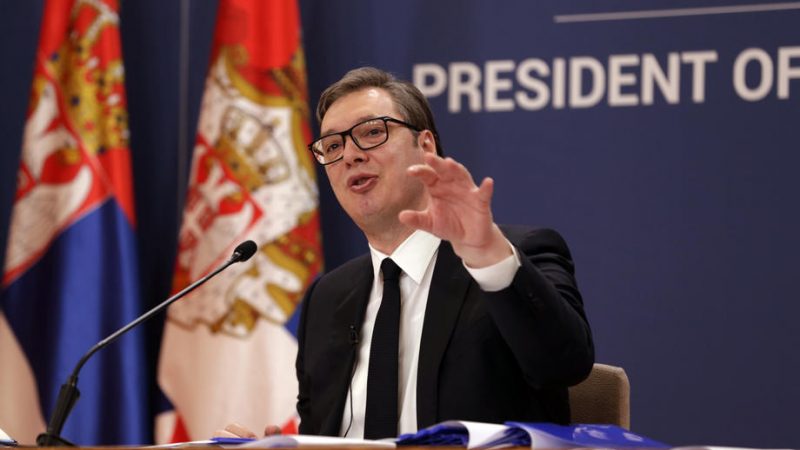 “We are now in a problem because the West will call on Serbia to head quickly towards recognising Kosovo so that they can tell Putin that the Donbas and Kosovo are not about the same issue,” he said adding that Kosovo will be the dominant issue in future. [EPA-EFE/ANDREJ CUKIC]

Serbia will find itself under tremendous pressure to quickly recognise Kosovo following the statements of Russian President Vladimir Putin, who recently compared Kosovo’s right to independence to the self-proclaimed republics of Donetsk and Luhansk, Serbian President Aleksandar Vučić said in Belgrade on Friday.

“Our situation has changed for the worse after the statements of Russian President Vladimir Putin. Not because he intended to harm Serbia, but because he raised the issue of Kosovo in a different way, to protect Russian interests,” Vučić said.

He said Western officials are now trying to ruin Putin’s argument by saying that Kosovo and the Donbas region are different cases.

“We are now in a problem because the West will call on Serbia to head quickly towards recognising Kosovo so that they can tell Putin that the Donbas and Kosovo are not about the same issue,” he said adding that Kosovo will be the dominant issue in future.

Still, Vučić said that he does not expect Russia to recognise Kosovo.

Vučić said that Serbia is paying a high price for not imposing sanctions on Russia and warned that the country is “100% dependent on Russian gas and will continue to be so for at least two more years.”

When it comes to Serbia’s EU path, he said Belgrade needs to continue its journey to the EU because the successes that it has made would have been impossible without its European surroundings, but it will not give up friendships in the East.

“Serbia would have never become the fastest-growing European economy without its European surroundings, European investments and the entire political and legal framework that it has gone through.”

“Serbia must continue along its path to the EU, and I do not mind if MPs want to motion for a vote of no confidence in me – that requires a two-thirds majority,” Vučić explained, adding that staying on the path to the Union did not mean that Serbia would not protect its national interests, or lose its identity.

In the televised address, Vučić said the policy that Serbia had defined after the conflict in Ukraine broke out “is well-thought-out, credible and mindful of the future” and that the fact that it had not “changed” after 70 days of war confirmed its validity.

He said that one of the key tasks on the country’s reform agenda would be to devise a new energy policy and that Serbia would need to use renewable sources of energy much more than it does now.

“We must be able to receive energy from renewable sources, which means that we have to build reversible power plants,” Vučić said.

Vučić also said that Serbia will remain a neutral country militarily, although it is surrounded by NATO member states, and that he would propose the introduction of a mandatory military service of 90 days.

“Every young man can set aside 90 days for his country,” he said.