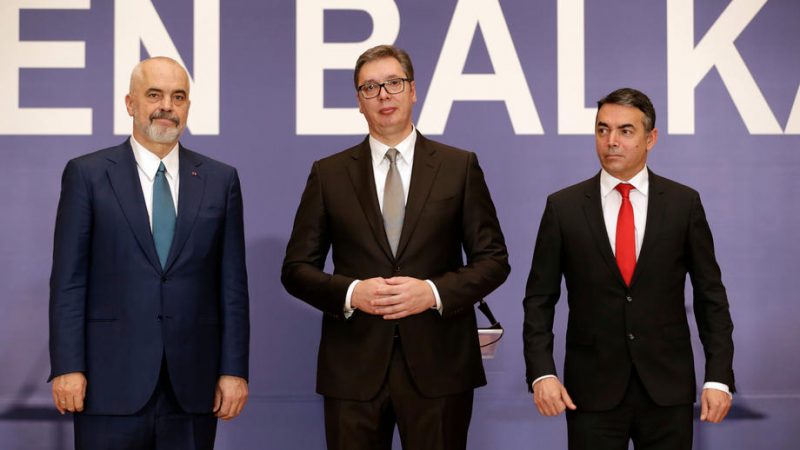 Serbian President Aleksandar Vučić, Albanian Prime Minister Edi Rama and North Macedonia’s Deputy PM Nikola Dmitrov agreed on Thursday (4 November) in Belgrade on the creation of a council that would coordinate the implementation of the Open Balkans initiative.

The Open Balkans initiative, formerly known as Mini Schengen, involves Albania, North Macedonia and Serbia and was renamed in late July at a meeting in Skopje. Its goals are to facilitate the movement and passage of goods and people between the three countries and finally abolish border control as of January 2023.

“We have arranged the formation of an Implementation Council and we will agree on its constitution soon. In the next seven to ten days we will hold meetings with customs representatives, representatives of various agencies and phytosanitary inspectors to see how the free passage of goods and services is going,” Vučić said.

Vučić announced that at the end of the year, another meeting would be held to sign a Memorandum of Understanding on the issue of work permits.

Albanian Prime Minister Edi Rama said that the focus of the meeting in Belgrade had been on people, farmers, companies and students who are negatively impacted by heightened control on borders. Rama said that all Western Balkan countries were invited to participate in the initiative. He did not regard the arguments against the initiative in Bosnia and Herzegovina, Montenegro and Kosovo as good reasons.

Other countries have been hesitant to join as they fear it could impact their EU accession hopes. Kosovo has also refused as Serbia does not recognise its independence.

While Montenegro has refrained from showing interest until now, on Tuesday (3 November) evening, Montenegrin Prime Minister Zdravko Krivokapic joined the three other leaders for an informal dinner.

North Macedonian Deputy PM Nikola Dimitrov said that regional cooperation was a wise, true and European choice which his country could not afford to not take part in.