Vučić to Biden: Kosovo recognition not mentioned in any agreement 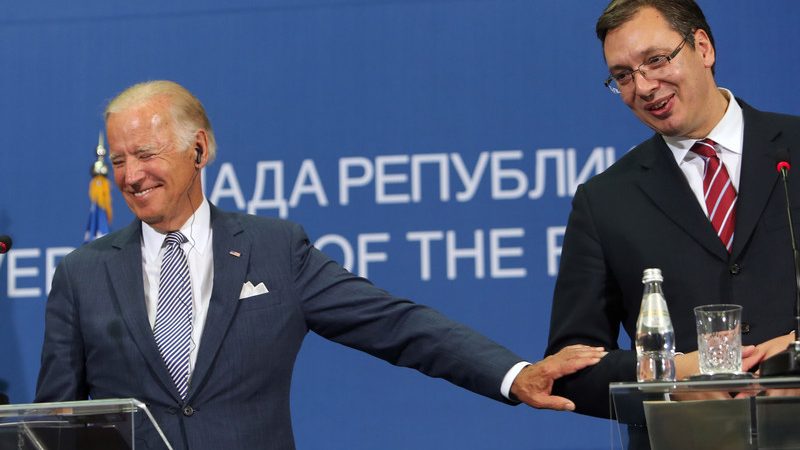 US President Joseph Biden congratulated Serbia on its Statehood Day, promising that the US would continue to support Serbia on its path to the EU, in conducting reforms and reaching a durable agreement with Kosovo “focused on mutual recognition.” [EPA/KOCA SULEJMANOVIC]

In response to US President Joseph Biden’s message supporting Serbia in reaching an agreement with Kosovo focused on mutual recognition, Serbian President Aleksandar Vučić said on Sunday that the term “mutual recognition” was not mentioned in any agreement or resolution.

Biden congratulated Serbia on its Statehood Day, promising that the US would continue to support Serbia on its path to the EU, in conducting reforms and reaching a durable agreement with Kosovo “focused on mutual recognition.”

“We remain adamant in our support to Serbia’s goal in terms of European integrations and are encouraging you to make the difficult steps to reach that goal, including the introduction of the necessary reforms and reaching a comprehensive normalization agreement with Kosovo, focused on mutual recognition,” the US president said in a letter to his Serbian counterpart.

“It is not very pleasant” to realise that US foreign policy is aimed at having Kosovo’s independence recognised, said Vučić. “We understand this is America’s new policy, and there were attempts in Washington, too, to force the term upon us as something that we were supposed to accept as a final solution. I made it very clear at the White House what I thought about mutual recognition and my answer would be no different this time,” Vučić told reporters.

Kosovo’s acting-president, Vjosa Osmani praised Biden’s letter to Vučić on Sunday, saying that recognising Kosovo was the only way for Belgrade and Pristina to reach a final agreement. I welcome the stance of President Biden on the dialogue between Kosovo and Serbia, wrote Osmani, adding that it is clear that the only outcome of the dialogue is a recognition treaty. (EURACTIV.rs | betabriefing.com)