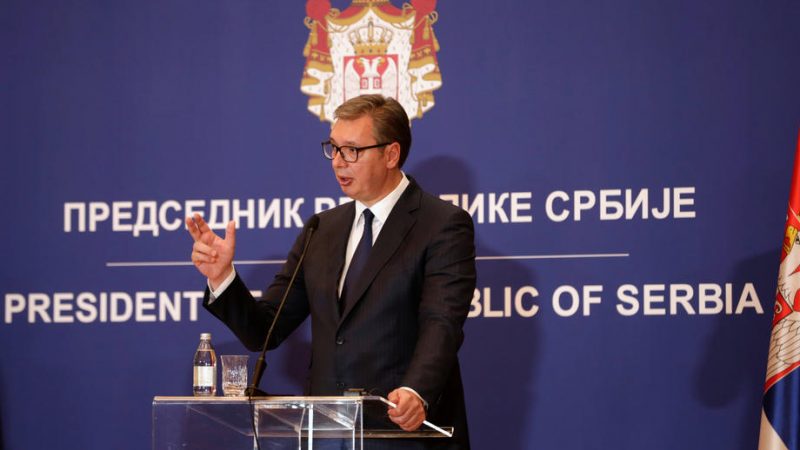 Serbian President Aleksandar Vučić called on the EU late on Monday to confirm whether the Brussels Agreement on the normalisation of relations between Belgrade and Pristina still stood. He said the seizing of status-neutral “KS” license plates off vehicles in northern Kosovo by police had been executed in contravention of the agreement and “without any previous agreement with anyone.”

The president also announced that there would be a session of the Serbian National Security Council on Tuesday. Vučić said that before chairing the session he would meet with representatives of the Quint group, which includes the US, the UK, Germany, France, and Italy, “to see what they want” from him.

Vučić also voiced hope that Serbia would not have to take economic retaliatory measures, as that would be detrimental to the entire region.

He also accused Kosovo authorities of violating all freedom of movement agreements, adding that he believed the EU itself had not encouraged Pristina to replace Serbia with Kosovo license plates.

Vučić further said he was sure the EU envoy to the Belgrade-Pristina Dialogue, Miroslav Lajčak, and EU High Representative Josep Borrell “had in no way encouraged such decisions, on the contrary.” Earlier in the day, Vučić met with Lajčak, who was visiting Serbia.

However, Vučić criticised representatives of the West, urging both Belgrade and Pristina to reduce newly risen tension.

“I’ve had more than enough of all that talk about appeals to both sides. I ask those who talk every day about appeals to both sides: ‘What has Serbia done unilaterally, how have we attacked them, how have we threatened them, what is it that we have done against them?’ Other than telling me that we don’t respect them as a state, you can’t name one unilateral move by Serbia,” Vučić said in Belgrade.

Earlier, the EU urged Pristina and Belgrade to refrain from taking unilateral actions and to solve this issue through the EU-mediated dialogue.

The US embassy in Pristina also urged Kosovo and Serbia to immediately defuse the tension created when license plate “reciprocity measures” were introduced.

“We join the European Union in calling on Kosovo and Serbia to exercise restraint, refrain from further unilateral actions, and reduce tensions–immediately, without delay,” the US embassy wrote on Twitter.

NATO’s mission continues its activities in accordance with its mandate and the security situation is stable, said the spokesperson of NATO-led KFOR, Antonio Minutella,

Kosovo Prime Minister Albin Kurti, for his part, said on Monday that Serbia had forced Kosovo to make Serbian vehicles use temporary car plates issued by the Kosovo authorities.

The kosovo-online.com portal quoted Kurti as saying that the purpose of the decision was not to affect the movement of Serbian citizens in Kosovo, or destabilisation of any kind, but that it only reflected a commitment to the agreements reached in Brussels.

Kurti insisted that the new measures “are not directed against the Serb community”. “Nothing extraordinary or discriminatory is happening today. We are just starting to implement an agreement both Serbia and the European Union have agreed to,” Kurti told MPs at Monday’s parliament session.

“The temporary car plates are not what we want, it’s a decision imposed by the other side. The citizens of Kosovo have been paying for such plates when entering Serbia for ten years,” Kurti said, adding that the measure adopted on Monday was legal and in full compliance with a deadline for removing the existing plates.

Kosovo’s Interior Minister Xhelal Svecla wrote on Facebook that the decision “obliges the provision of temporary license plates for all vehicles that have Serbian licence plates and enter the territory of the Republic of Kosovo at all border crossing points”.

“The interior ministry has taken the necessary steps to remove all illegal markings in the territory of the Republic of Kosovo, the border crossings included. Regardless of the nationality of the owner of invalid car plates, they will be confiscated,” Kurti said, adding that cars with Serbian registration plates entering the territory of Kosovo will receive temporary car plates “at all border crossings”.