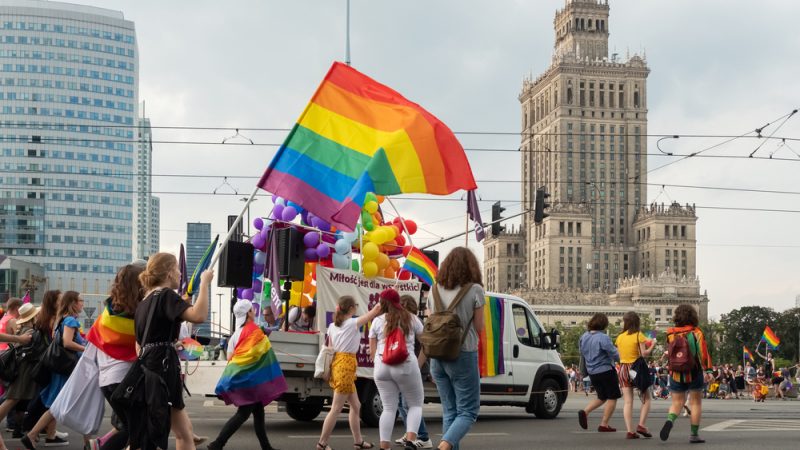 The Parade was also attended by Bix Aliu, the highest-ranking US diplomat in Poland, who serves as ambassador. [Shutterstock/Mazur Travel]

The largest gay pride parade in central Europe took place on Saturday (19 June) in Warsaw for the first time in two years after a break during the pandemic and amid a backlash in Poland and Hungary against LGBT rights.

This weekend’s Equality Parade comes 20 years since the event was first held in the Polish capital. Warsaw Mayor Rafal Trzaskowski walked at the head of the parade – a sign of support for LGBT rights.

“I welcome a tolerant Warsaw,” he said shortly before the parade began.

The parade was also attended by Bix Aliu, the highest-ranking US diplomat in Poland, who serves as ambassador.

Poland is the most homophobic country in the EU, according to a ranking by the international LGBT organisation ILGA Europe.

“A lot of things have happened in these two years. However, as a community we are coming out stronger on the streets. Our hearts today are also in Budapest, in Minsk,” organisers said at the start of the march attended by thousands of people.

A year ago, the Polish LGBT community faced a backlash from ruling conservative politicians, local communities and the church at the same time as the election campaign.

During the reelection campaign, President Andrzej Duda declared that “LGBT is not people; it’s an ideology.” Meanwhile, dozens of local communities were passing resolutions against “LGBT ideology” in what was described as an attempt to protect the traditional family. Their creation has been condemned by the EU.

The parade comes days after Hungary’s parliament passed a law that that bans the “portrayal and promotion” of homosexuality and trans identity in schools, media content and adverts. (Mateusz Kucharczyk | EURACTIV.pl)