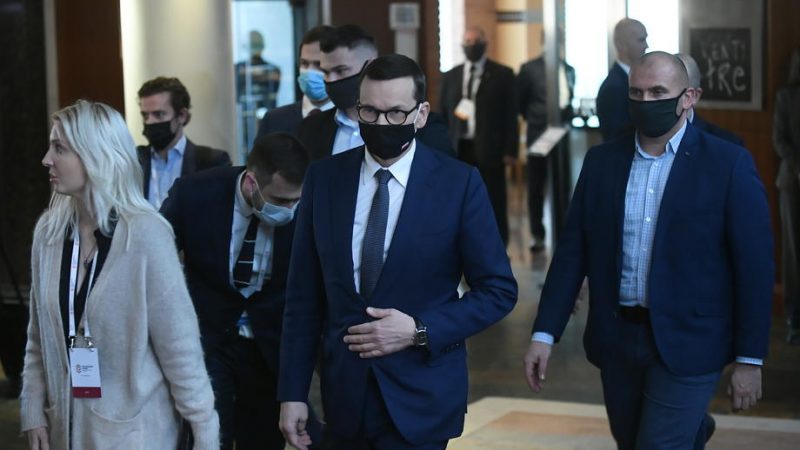 The meeting in Warsaw aimed to bring change to the European Union, which nationalist and populist parties say undermines sovereign nation-states.

Jarosław Kaczyński said Europe today stood before “new challenges”, and criticised federalisation trends in the EU, for which he blamed Germany. He warned that a federalised EU would restrict the independence of its members.

“The participants discussed closer cooperation between their respective parties in the European Parliament”, the statement also said.

This would include “organising joint meetings and aligning the votes on common issues, such as protecting the sovereignty of member states and the stance on illegal immigration”, it added.

Le Pen said she hoped that a single European Parliament group could be formed, the second-biggest force after the centre-right European People’s Party.

But there is still a long way to go, and the absence of potential allies, Matteo Salvini, leader of Italy’s League and Giorgia Meloni from the Brothers of Italy were notable.

The summit followed Morawiecki’s meeting with Le Pen last October in Brussels – as the first leader of an EU country – and the visit by Le Pen to Budapest a few days later as part of an effort to consolidate the European right.

This rapprochement follows years of antagonism over Le Pen’s closeness with Russian President Vladimir Putin. Radoslaw Fogiel, a PiS spokesperson, admitted that parties do not agree on all topics but that the most pro-Russian project currently in Europe is the Nord Stream 2 pipeline supported by outgoing German Chancellor Angela Merkel.

However, the opposition in Poland accuses PiS of strengthening cooperation with pro-Russian parties. “Russia doesn’t care that the far right is verbally anti-Russian. Russia is interested in being overtly anti-EU, anti-American, anti-LGBT, anti-vaccine, anti-refugee, anti-…. whatever – as long as it polarises society.

In Poland, PiS and the Confederation act on behalf of Russia, whether their leaders and electorate understand this or not”, tweeted Donald Tusk, the main opposition party Civic Platform leader.