Western Balkans must not be forgotten, Czech and Austrian leaders say 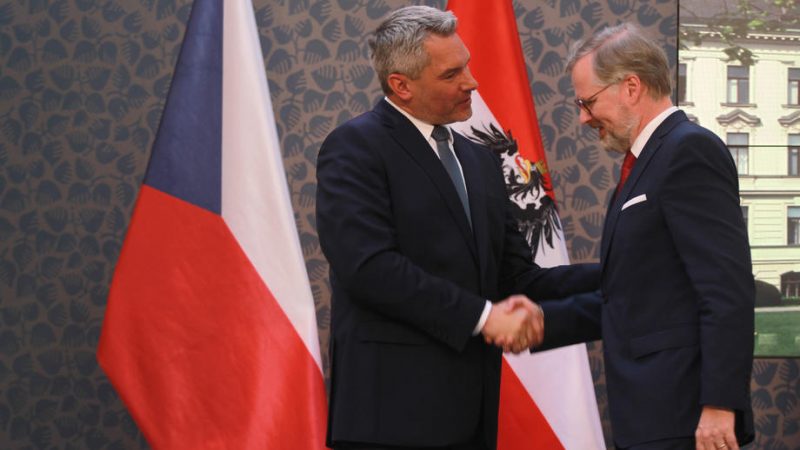 Fiala and Nehammer met in Prague on Tuesday (17 May) and discussed the situation in the Western Balkans, including in Bosnia and Herzegovina. [EPA-EFE/MILAN KAMMERMAYER]

The integration of Western Balkan countries into the EU is in the interest of the Czech Republic and Austria, Czech Prime Minister Petr Fiala and his Austrian counterpart Karl Nehammer said in Prague on Tuesday.

Fiala and Nehammer met in Prague on Tuesday (17 May) and discussed the situation in the Western Balkans, including in Bosnia and Herzegovina.

“The world public has concentrated on the war in Ukraine, with the Balkans not being given so much attention,” said Nehammer after the meeting.

Austria’s chancellor also pointed to the very tense situation in Bosnia. “The EU’s attention is needed. I would not like the Balkans to feel that we forgot about its candidacy for EU accession,” Nehammer added.

Fiala confirmed that the Western Balkans are a “significant issue” for the upcoming Czech EU Council presidency.

Prague is mulling organising a Western Balkan summit when it takes over the rotating EU Council presidency in July, though this will depend on whether the current French presidency will follow through with its plan to stage the meeting.

“Balkan countries are facing a number of demands from the European Commission. It is vital for both of us to see a clear and fair approach here,” Nehammer said.

Fiala stressed that the EU should also grant candidate status to Ukraine as soon as possible, noting, however, that the process should fulfil all the required conditions.