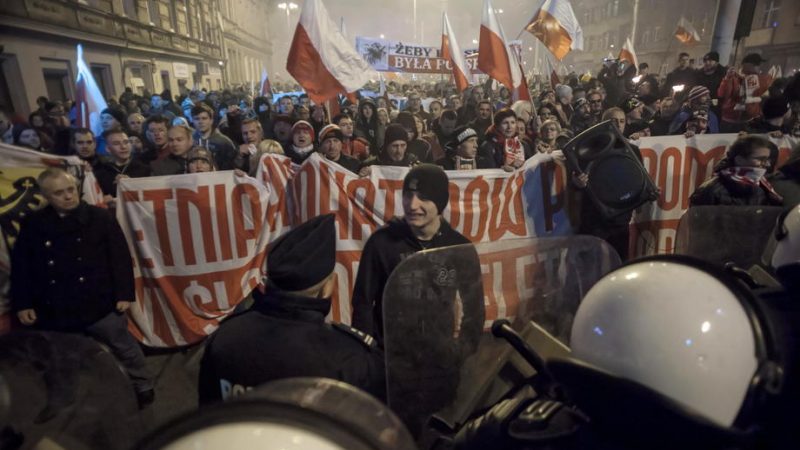 As Poland celebrates Independence Day on Wednesday, far-right groups such as All-Polish Youth (Młodzież Wszechpolska), the National Radical Camp (Obóz Narodowo-Radykalny), and many hooligans who in the past have often carried flares and knuckle-dusters to cause riots, will not clash with the Women’s Strike panned counterdemonstration as this will take place online.

Back in 2018, the Independence March was criticised by then ALDE party leader Guy Verhofstadt, who called participants in the march “fascists, neo-Nazi and white supremacists”.

“I’m not talking about Charlottesville in America, I’m talking about Warsaw, Poland, 300 kilometres more or less from Auschwitz and Birkenau”, he said.

This year’s march will have attendees drive in cars due to the pandemic.

“There are accusations that demonstrations like the Independence March can cause a rise in infections,” explained nationalist Confederation’s MP Robert Winnicki.

“We have nothing to do with the recent weeks’ attempts to destabilise the political and social life of the country by leftist and liberal camps,” said Robert Bąkiewicz, the leader of the march’s board – a clear allusion to the Women’s Strike marches.

Meanwhile, Women’s Strike is organising its own counterdemonstration – but not in the streets. The “Anti-nationalism quarantine” will be held online.

“We don’t want clashes with nationalists on 11 November,” announced the leader of the strike Marta Lempart, adding that pro-abortion and women’s rights activists will not be provoked in the streets and stay home instead.

“As we bagger churches, let’s also bagger their jacked-up defenders”, Lempart wrote on her Facebook page.

This does not mean the Women’s Strike will ignore the Independence March, Lempart added. During the online event, participants will discuss clearing the Polish internet from nationalist and hateful content. (Aleksandra Krzysztoszek | EURACTIV.pl)