Experts: No end in sight for rumbling La Palma volcano 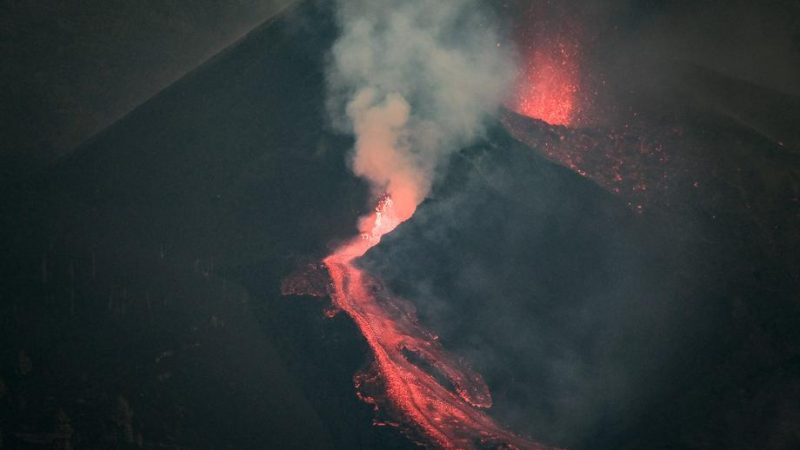 A spike in seismic activity was recorded on Thursday on the Spanish island of La Palma where the Cumbre Vieja volcano continues to rumble 26 days after it first started erupting.

Some 60 earthquakes have been registered on the island since the early hours of Thursday, according to the National Geographic Institute (IGN), EURACTIV’s partner EFE reported.

The largest, a magnitude-4.5 earthquake recorded at a depth of 37 kilometres, shook Villa de Mazo. The tremor came three seconds after a 4.1 magnitude quake at the same depth.

The volcano is releasing a three-kilometre high plume of gas and ash with high amounts of sulphur dioxide. Around 17,774 tonnes of sulphur are spurting out every day.

If the eruption were tapering off, the volume of sulphur dioxide emissions would have dropped to around 100 tonnes, María José Blanco, scientist of the Special Plan for Civil Protection and Emergency Care due to Volcanic Risk (PEVOLCA), said on Wednesday.

More than 640.27 hectares have been affected by the eruption, and the three rivers of lava have a combined width of 1.7 kilometres.

Molten rock has already flattened around 90 hectares of banana crops in the coastal area of the Aridane Valley. The plantations are a cornerstone of the Canary Islands’ economy.

According to data gathered by Copernicus satellites, 1,541 buildings have been affected by the eruption, of which 1,408 have been destroyed.

Spain’s Department of Homeland Security has reported that air quality is good, and winds are expected to push the ash west towards the Atlantic Ocean.