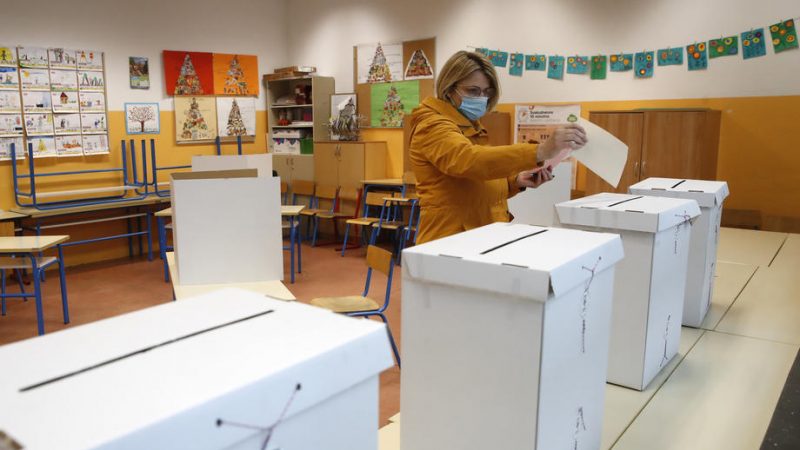 The Green-left coalition’s mayoral candidate Tomislav Tomašević got 48.6% of the vote. [EPA-EFE/ANTONIO BAT]

The Green-left coalition of the We Can!, Zagreb is Ours, New Left, ORaH and For the City parties were projected as the biggest winners of local elections held Sunday, according to exit polls.

The Green-left coalition’s mayoral candidate Tomislav Tomašević was projected to receive 48.6% of the vote.

Meanwhile, Jelena Pavičić Vukičević from the Labour and Solidarity party BM 365 was projected to gain 11.5% of votes. BM stands for Zagreb’s late mayor, Milan Bandić, who had an uninterrupted 20-year run in office, but suddenly died of a heart-attack last summer. His party is still using his name.

In the elections for the Zagreb City Assembly, the Green-left coalition obtained 45.96% of the vote, which would give it 24 out of 47 possible seats in the city assembly.

This means Zagreb  – which counts almost 25% of the country’s population, 50% of its economy and is the only region in Croatia to have a positive population growth – could get new leadership which is strongly opposed to the national government.

In Split, a southern city on the Adriatic coast, there will be a second round between the candidates of the Centre Party and the governing HDZ, while in the largest eastern city of Osijek, candidates of HDZ and the far-right Homeland movement are set to battle it out. In the northern Adriatic port city of Rijeka, candidates of SDP will square up to the list of the former director of Clinical Hospital Centre of Rijeka.

The election’s biggest loser was the Social Democrats (SDP), formerly the second political force in Zagreb. They lost ground in the capital, Split and Osijek and failed to win Rijeka. The year-old nationalist and populist Homeland movement returned a good showing.

Though the elections will not have an impact on the governing coalition, the leadership in the ruling HDZ party will most likely face criticism from its right-wing faction for failing in Zagreb. The local elections are a sign that SDP is in danger of losing its spot as the second political force in Croatia. (Željko Trkanjec | EURACTIV.hr)